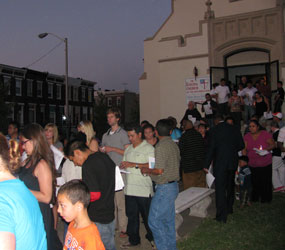 While Baltimore City immigrants are living in fear of violence and persecution, they are united for change.

Hundreds took to the street in a vigil Aug. 29, holding candles, singing and praying for a murdered friend, immigration reform and an end to violence.

Walking with them from an Episcopal church to Patterson Park blocks away was Redemptorist Father Robert Wojtek, pastor of the Catholic Community of St. Michael and St. Patrick in Fells Point and Auxiliary Bishop Mitchell T. Rozanski.

Father Wojtek said a rash of crimes against people from the Latino and Hispanic communities, including the murder of a Honduran man in Baltimore City, has led to concerns amongst Hispanics and Latinos that they are being targeted.

During an Aug. 24 news conference, local leaders from the National Association for the Advancement of Colored People hoped to quell any fears of division between the black and Latino communities. The NAACP, they said, stood in solidarity with Hispanics and Latinos.

Father Wojtek said targeting fears are not new and that some immigrants feel helpless because they lack documentation. Raids by U.S. Immigration and Customs Enforcement teams have created a sense of panic locally in Hispanic and Latino communities.

Father Wojtek said: “They’ve been beaten up and sometimes it’s only when they come to the rectory that I’ll be able to say, ‘Have you gone to the police?’ They’ll say, ‘No, no, no!’ They’re afraid. Or they’ll just heal they’re wounds and take care of themselves the best they can.”

The fact that Holley reportedly said he hated “Mexicans” while Reyes was actually from Honduras was not lost on Father Wojtek.

“There’s just such ignorance out there,” he said.

The Archdiocese of Baltimore has made a push for immigration reform. Many parishioners have been living in fear of deportation and some people, priests say, have been sent back to their home countries.

“Until something happens on the national level with immigration laws, these things are going to happen in different places,” Father Wojtek said. “You still have legislators proposing draconian legislation that is only going to fuel this.”

Father Wojtek said those proposed laws should embolden the church to call believers to be compassionate to immigrants.

Bishop Rozanski said the archdiocese must stand against hatred and violence.

“It shows that we have a lot of work to do,” he said. “We have a lot to do to get out the message of the Gospel. It is scary that this happens in this day and age, but it is also for us a sign that we really need to preach the Gospel and bring the Gospel out to everyone.”