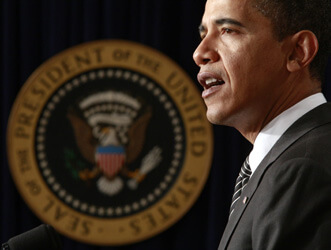 WASHINGTON – University of Notre Dame officials were standing firm on their choice of President Barack Obama as commencement speaker at the institution’s May 17 graduation, in spite of a large number of Catholics calling on them to rescind the invitation.

The Indiana university, run by the Congregation of Holy Cross, and the White House announced March 20 that President Obama would be Notre Dame’s 2009 commencement speaker and confirmed he will receive an honorary doctor of laws degree at the graduation.

“The invitation to President Obama to be our commencement speaker should not be taken as condoning or endorsing his positions on specific issues regarding the protection of human life, including abortion and embryonic stem-cell research,” said Holy Cross Father John I. Jenkins, president of the University of Notre Dame.

“Yet, we see his visit as a basis for further positive engagement,” he said in a March 23 statement.

The announcement on President Obama was promptly followed by a flurry of criticism from Catholics, who said the president’s support of legal abortion and embryonic stem-cell research makes him an inappropriate choice to be the commencement speaker at a Catholic university.

The Cardinal Newman Society – a Manassas, Va.-based Catholic college watchdog group – announced March 23 it had collected more than 54,000 signatures so far in an online petition that calls for Notre Dame to rescind its invitation to Obama to be this year’s commencement speaker.

“We fully expected some criticism and have received it, though nothing more than we anticipated,” said Dennis K. Brown, a spokesman for Notre Dame. “I can’t foresee us rescinding the invitation.”

Mr. Brown told Catholic News Service March 23 that he has heard anecdotally that most students are pleased with this year’s choice of President Obama as the commencement speaker and feel honored the first black U.S. president would accept Notre Dame’s invitation from among the many he has received.

The 44th president also will deliver the commencement addresses at Arizona State University May 13 and the U.S. Naval Academy May 22, White House press secretary Robert Gibbs said March 20. The U.S. president traditionally delivers a speech to graduating students at one of the U.S. military academies.

President Obama will be the ninth U.S. president to receive an honorary degree from Notre Dame and the sixth to be a commencement speaker. In 2001, President George W. Bush addressed the graduating class about the importance of faith-based organizations.

The petition drive initiated by the Cardinal Newman Society called it “an outrage and a scandal” for the university to honor President Obama and asked Father Jenkins to “halt this travesty immediately.”

“This nation has many thousands of accomplished leaders in the Catholic Church, in business, in law, in education, in politics, in medicine, in social services and in many other fields who would be far more appropriate choices to receive such an honor,” the petition says.

By close to 3 p.m. EDT March 24, the Web site www.notredamescandal.com reported having received more than 73,840 signatures on the petition.

Bishop John M. D’Arcy of Fort Wayne-South Bend – the diocese where Notre Dame is located – issued a statement March 24 saying he will not attend the 2009 Notre Dame commencement as a silent protest of Obama’s policies regarding life issues. He said it will be the first time he will be absent from the ceremony in the 25 years he has been bishop of the diocese.

“I wish no disrespect to our president, I pray for him and wish him well,” Bishop D’Arcy said. “But a bishop must teach the Catholic faith ‘in season and out of season,’ and he teaches not only by his words – but by his actions. My decision is not an attack on anyone, but is in defense of the truth about human life.”

The bishop also said he was disappointed with Notre Dame’s choice of President Obama as its commencement speaker, a pick he called “prestige over truth,” and cited a 2004 statement by the U.S. Catholic bishops: “The Catholic community and Catholic institutions should not honor those who act in defiance of our fundamental moral principles. They should not be given awards, honors or platforms which would suggest support for their actions.”

“By inviting Barack Obama as commencement speaker, Notre Dame is telling the nation that the teaching of the Catholic Church on this fundamental matter (of abortion) can be ignored,” Ralph McInerny, a philosophy professor at Notre Dame, said in a March 23 column on his Web site, The Catholic Thing.

“For one whose 54-year career as a member of the Notre Dame faculty is coming to an end this June, it is a bitter thing to reflect on the 2009 commencement speaker,” he said.

Father Jenkins pointed out that U.S. presidents from both parties have come to Notre Dame for decades to speak to its graduates about a wide range of pressing issues – from foreign policy to poverty, from societal transformation to social service.

“We will honor Mr. Obama as an inspiring leader who faces many challenges – the economy, two wars, and health care, immigration and education reform – and is addressing them with intelligence, courage and honesty,” he said.

“It is of special significance that we will hear from our first African-American president, a person who has spoken eloquently and movingly about race in this nation. Racial prejudice has been a deep wound in America, and Mr. Obama has been a healer,” he said.

Jesuit Father Thomas J. Reese, a senior fellow at the Woodstock Theological Center at Jesuit-run Georgetown University in Washington, said he found it curious that Notre Dame would receive so much flak about its choice of commencement speaker, given that no such outrage occurred when the archbishop of New York invited Obama to speak at the 2008 Al Smith dinner.

“This is absurd,” Father Reese said in a statement. “If Cardinal Edward Egan of New York can invite Obama to speak at the Al Smith dinner in October of 2008 when he was only a presidential candidate, then there is certainly nothing wrong with Notre Dame having the president speak at a commencement.