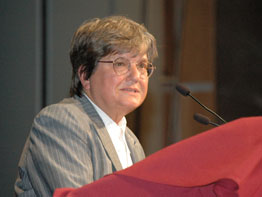 DENVER – It was a rocky start to the Democratic National Convention’s first “Faith in Action” interfaith gathering at the Colorado Convention Center’s Wells Fargo Theater Aug. 24.

What was billed as a chance to “honor the diverse faith traditions inside the Democratic Party” quickly devolved into controlled chaos as anti-abortion activists interrupted the opening proceedings.

Shortly after the beginning of a performance by the Spirituals Project singing group based in Denver, Randall Terry from Operation Rescue – a pro-life organization based in Wichita, Kan. – interrupted the proceedings by saying “Obama supports abortion, a system responsible for the murder of children.” He was quickly drowned out with boos and chants of “Yes We Can!” from the crowd of roughly 1,500 attendees before he was escorted out of the hall by security.

Another Operation Rescue activist quickly followed suit, standing up and exclaiming that “Abortion is murder!” Once again, boos resounded throughout the hall before he was led out. A third heckler stood up and shouted “Obama is a baby killer!” The statement was met with chants of “Obama! Obama!”

The interfaith event featured speakers from several religious backgrounds, including Muslims, Jews, Catholics and other Christians. Once the disruptions were finished, the program continued with several keynote speeches from religious leaders and a prominent Colorado politician.

“What we’re celebrating is something that we should be mindful of, and that is that there absolutely is in our party a tremendous intersection of faith and politics,” said Colorado Gov. Bill Ritter, a Catholic Democrat who was elected to his position in 2006.

Sister Helen Prejean, who celebrated her 50th jubilee as a Sister of St. Joseph of Medaille in 2007, delivered a keynote speech in which she said that the death penalty in the United States is racist and based on economic class. She also accused President George W. Bush’s administration of ignoring the U.S. Constitution while handling enemy combatants in the war on terror and linked that to a disregard for life through the death penalty in the United States.

“Inherent in the practice of the death penalty is the practice of mental torture,” said Sister Prejean, who earned the day’s largest ovation after a 20-minute speech that was sharply critical of the U.S. government, past and present.

“If we understand what we’re doing in our own killing chambers, we will better understand what happened at Abu Ghraib and what’s happening at Guantanamo … and how it has happened that our own attorney general and lawyers from our Justice Department employed shocking legalisms to bypass the Geneva Conventions in order to legitimize torture of suspected terrorists.”

Bishop Charles Blake, a self-described pro-life Democrat and national bishop of the Church of God in Christ, delivered an impassioned speech on the nation’s responsibility to children, calling for increased government spending for education and social programs and advocating a redistribution of wealth in the name of defending children. He also called to task the American abortion system.

“Our children have sacred value, and each child is equally valuable,” said Bishop Blake, pastor of the 24,000-member West Angeles Church of God in Christ in Los Angeles. “Some of us (Democrats) have philosophic, humanitarian and theological differences with those who put forth abortion as an appropriate routine and acceptable birth-control procedure.

“Surely, we cannot be pleased with the routine administration of millions of surgically terminated pregnancies,” he added. “Something within us must be calling for a better way. If we do not resist at this point, at what point will we resist?”

Patrick Whelan, president of Catholic Democrats in Boston, helped lead the opening prayer and litany in a portion titled “Our Responsibility to Our World” that called upon the teachings of St. Francis of Assisi.