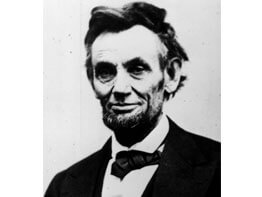 WILMINGTON, Del. – The presidency of Abraham Lincoln can be placed in the context of the Eight Beatitudes, according to Bishop W. Francis Malooly of Wilmington.

“The beatitudes … give us a window on Lincoln because they were expressed in so many ways in his life,” Bishop Malooly said in a pastoral letter published in The Dialog, Wilmington’s diocesan newspaper, on Feb. 12, the 200th anniversary of Lincoln’s birth.

“When asked by his campaign biographer in the 1860 election to describe his early life, Lincoln replied that it could be found in a single sentence from Thomas Gray’s poetry: ‘The short and simple annals of the poor,’ “ Bishop Malooly said.

“Lincoln’s experience of poverty as well as the loss of his mother and sister while he was young forged wellsprings of strength and compassion that would be vital to his presidency,” he continued. “His simplicity, generous intentions and focus on the common good often helped him to discern effectively what was needed in a given crisis or historical crossroads.”

The deaths of his mother and sister – and that of young son Willie while Lincoln was in the White House – made Lincoln a living example of the beatitude “Blessed are those who mourn, for they shall be comforted,” Bishop Malooly said.

“Somehow the memory of President Lincoln’s countenance showing us both his goodness, his strength and his sadness moves us, strengthens us and inspires us right in the midst of our ongoing grief to serve those around us beset by similar tragedies,” he said.

“Although Lincoln presided over a bloody Civil War, he insisted at its conclusion that the next step was reconciliation and not punishment or triumphalism,” he said.

“One of his well-known gestures of reconciliation and mercy which signaled what would have been his approach to Reconstruction was his instruction, upon hearing the news of Gen. (Robert E.) Lee’s surrender to Gen. (Ulysses S.) Grant at Appomattox Court House, that the Union band play ‘Dixie,’ “ said the bishop, a former auxiliary bishop of Baltimore.

“We, like Lincoln, are called to be instruments of the mercy of Christ’s heart and in moments of conflict in our lives to inspire people to follow paths of forgiveness and peace,” he said.

“I cannot help but think of the story of the White House reception the night after Lincoln’s celebrated second inaugural address,” the bishop said.

“Frederick Douglass arrives and is barred by Union soldiers from entering the reception. He is certain that the president wants him to enter and eventually he is ushered in through the crowd,” the bishop wrote. “Lincoln sees him and moves toward him beaming with affection and respect, eager to discuss Douglass’ evaluation of his second inaugural address.”

Bishop Malooly added, “America has not completed its journey of providing justice to African-Americans, but it was Abraham Lincoln who ensured that the journey would at least begin.”

Because Lincoln was “pilloried … ridiculed and caricatured” during his presidency, Bishop Malooly said, he knew well the beatitude “Blessed are you when men revile you and persecute you and utter all kind of evil against you falsely on my account. Rejoice and be glad, for your reward is great in heaven.”