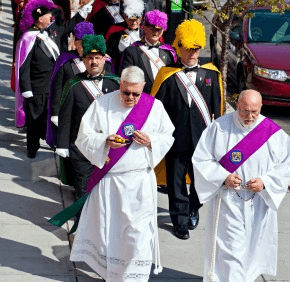 By Paul McMullen
pmcmullen@CatholicReview.org
Twitter: @ReviewMcMullen
Deacon John C. Gramling, whose causes ranged from a parish and hospital in Towson, to the Knights of Columbus and their founder, to the staunch respect of life, died Dec. 31 at age 81 of cancer.
A native of Milwaukee, Deacon Gramling was a 1952 graduate of Marquette University High School. A longtime vice president of Riggs, Counselman, Michaels & Downes, he was ordained to the permanent diaconate for the Archdiocese of Baltimore in 1974. He served Immaculate Conception Parish in Towson until his retirement in 2001, and continued to be listed as its deacon emeritus.

“He was officially retired when I got to Immaculate Conception in 2007, but continued to maintain a pretty healthy commitment to the parish,” said Deacon Kevin Reid, now assigned to the Catholic Community of South Baltimore. “For years he led the rosary before the daily 8:30 a.m. Mass.
“He also helped out for many years at the Greater Baltimore Medical Center as a pastoral associate.”
Deacon Reid serves as the deacon liaison for the archdiocesan Office of Clergy Personnel, and noted Deacon Gramling’s contributions to the local deacon’s handbook, most recently revised in 2012.
“John was a longtime member of the Deacon Personnel Board, and helped craft our bylaws,” Deacon Reid said. “Many deacons have expressed their sorrow and ‘Deacon John’ stories, how he would address us all before leading the group of deacons in the Liturgy of the Hours by saying, ‘Remember guys, this isn’t a race.’ ”
Deacon Gramling was a past grand knight of the Knights of Columbus Father O’Neill Council #4011 in Lutherville, where Deacon Reid said he was a founding member of the Our Lady of Victory Assembly for fourth-degree Knights.
Deacon Hugh Mills, who serves the National Shrine of St. Alphonsus Liguori in Baltimore, described Deacon Gramling as being “very strong in the pro-life movement.”
“He and I served as deacons at pro-life Masses throughout Maryland and as far south as northern Virginia,” said Deacon Mills, who spoke to the Catholic Review while making pastoral rounds at a VA facility in Northeast Baltimore. In March 2012, the two led a procession after a Knights of Columbus pro-life Mass at the Basilica of the National Assumption of the Blessed Virgin Mary in Baltimore to a nearby Planned Parenthood facility.
“That was John’s idea,” Deacon Mills said. “It had not been discussed beforehand. I would follow him anywhere. … He was a huge protector of life. He would stand against the gates of hell to save a child’s life.”
Deacon Gramling promoted the sainthood cause of Father John McGivney, and encouraged friends and strangers alike to learn more about him and visit the Baltimore Basilica, where the founder of the Knights of Columbus had been ordained.
Deacon Gramling is survived by his wife, Peg, their five children, and eight grandchildren.

Visitation will be at the Ruck Towson Funeral Home, 1050 York Road (Beltway Exit 26), Jan. 6, from 2-4 and 7-9 p.m., with a vigil service recited at 7:30 p.m. A funeral Mass will be offered Jan. 7, at 10 a.m., at Church of the Immaculate Conception in Towson. Interment will follow at Dulaney Valley Memorial Gardens. In lieu of flowers, memorial contributions may be given to Glastonbury Abbey, 16 Hull St., Hingham, MA 02043.

Note: This article was updated at 12:44 p.m. Jan. 4 to correct two errors, regarding Deacon Gramling’s educational background and secular employment. The Catholic Review regrets the errors.