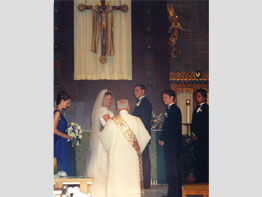 One of Deacon Charles Hiebler’s greatest joys as a permanent deacon is witnessing weddings. Working with young couples preparing to commit their lives to one another helps strengthen his own faith and life commitments, he said.

“It always reminds me of my own marriage and the sincerity of a couple living and working to make it last,” said Deacon Hiebler, who has been married to his wife, Joyce, for 38 years.

“I like to get to know the couple and really discuss what it is to be married,” he said. “It’s more than just going to the church and saying the vows.”

As a clergyman, Deacon Hiebler has witnessed more than 100 weddings since his ordination 24 years ago. He works in the western vicar’s office at the Catholic Center in Baltimore and ministers at the Cathedral of Mary Our Queen in Homeland.

In preparing a couple for marriage, Deacon Hiebler meets with the bride and groom about five times. He uses an inventory of questions to help the couple understand areas of agreement and disagreement.

In his wedding homilies, the deacon emphasizes that a marriage is a kind of trinity involving husband, wife and God.

“I tell couples that if they have a relationship with God, no matter what happens in life, God will be there for you with the grace to help you through,” he said, adding that he encourages couples to pray together.

“If you don’t practice faith, it’s difficult to know where to turn when you need help,” he said.

Married life is a vocation, Deacon Hiebler said, and it requires sacrifice so that Christian values are not compromised and that families can be raised on solid footing, he said.

One of Deacon Hiebler’s favorite stories he sometimes tells in his wedding homilies involves a young couple that exchanged vows at Mount St. Mary’s University in Emmitsburg several years ago.

At the end of the ceremony, the bride attempted to ring a bell, as was the tradition at the chapel. With great difficulty, she pulled the rope several times, but the bell failed to toll. After a few minutes, the husband stood beside his wife and the two pulled the rope together. The air was filled with a jubilant noise.