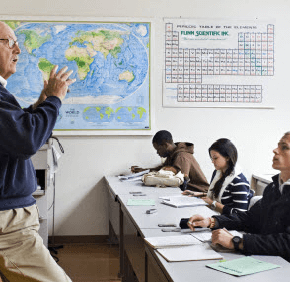 ARNOLD –Deacon David Tengwall relishes weddings. The marriage coordinator at St. Andrew by the Bay in Annapolis, Deacon Tengwall, 65, is happy to work with Catholic couples who are not parishioners, but want to wed in America’s Sailing Capitol. Last summer he celebrated 10 weddings.

An affinity for marriage preparation and the wedding day liturgies is not universal among clergy, said Deacon Tengwall, who was ordained in 2007. Some would rather avoid the demands of young, idealistic brides, but 34 years of teaching the history of western civilization at Anne Arundel Community College in Arnold has given him perspective.

“I’ve been working with young adults my whole life,” he said.

The department chair for the college’s history, political science and philosophy departments, Deacon Tengwall started at Anne Arundel in 1978, after returning from Lisbon, Portugal, where he studied on a Fulbright fellowship.

Five years later, Deacon Tengwall was the chair of the history department. For many years, he held multiple jobs, also teaching at Loyola University Maryland, Goucher College, and St. Mary’s Seminary, all in Baltimore, and the U.S. Naval Academy in Annapolis. He estimates he has had more than 13,000 students over his career, and has officiated at a few of their weddings.

He launched a study abroad program at Anne Arundel, and he and his wife, Cathy, took students and community members across Europe. For 17 years, they brought college students to London during January. Deacon Tengwall began each trip with a nighttime visit to the Palace of Westminster, introducing the students to the city with an iconic vision – the illuminated Big Ben bell tower.

Deacon Tengwall’s affection for the Millennial Generation came across as he prepared Jon and Lindsey Goebel for their 2011 wedding, Jon Goebel said.

“He made us feel very comfortable with the situation, and we were really inspired by him,” said Goebel, 32, a parishioner of St. Casimir, Canton. “He’s not someone who ever speaks down to someone or is preachy. He can really speak the language of the younger generation.”

Young people keep her husband young, too, Cathy Tengwall said. For him, she said, life boils down to loving and relating well to others.

“He is so gifted intellectually and with communication skills. When he preaches, he brings a level of credibility,” Father Dauses said. “(Students) have a great respect for him as a teacher, and to see him exercise his ministry as a deacon challenges them to see that there can be this great cohesiveness between our Christian faith and our intellect.”

Deacon Tengwall approaches preaching with gusto – unsurprising, perhaps, for a man who has made a living at the front of a classroom. Somewhat unexpected might be his other love, hospital ministry. He regularly visits Baltimore Washington Medical Center in Glen Burnie, where tries simply to be present and listen, he said.

He has also been on the receiving end of that ministry, when his youngest son was admitted to a Richmond, Va., hospital after contracting spinal meningitis in college in 2002. There, a chaplain stayed by his family’s side, even after they knew their son would recover.

When Deacon Tengwall returned to Annapolis from Richmond, he decided to pursue the diaconate. It had been in the back of his mind for a long time, he said. He entered the program as an aspirant in 2003.

Deacon Tengwall said his various roles connect to a concept he embraced in the diaconate program: formation.

“Every day there’s going to be something that comes up that challenges and tests you, and that’s life,” he said. “It’s a continual formation every day of your life.”