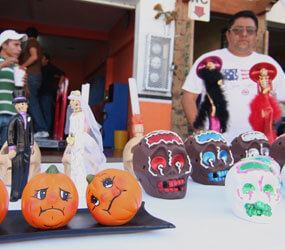 TEPOZTLAN, Mexico – “Dia de los Muertos,” the traditional Mexican commemoration of deceased loved ones, has taken on a deeper meaning in light of drug-related violence in recent years.

Drug-related killings have been on the rise since 2006, surpassing 15,000 in 2010, according to a study commissioned by the Trans-Border Institute at the University of San Diego.

“We’re living in a barbarian age,” said Argelia Barcas Bello, a teacher at Santiago in Tepoztlan, a town built on Tepozteco Mountain near Mexico City. The town receives many visitors who come to see a nearby ancient pyramid.

Barcas and other merchants set up shops, selling items for “ofrendas,” altars set up to remember deceased loved ones for the annual Day of the Dead observance.

“We’re seeing many more deaths because of the delinquency,” Barcas said, adding that those who died accidentally or due to violence are remembered in her town Oct. 28.

Alejandro Alvarez, another merchant, said Mexico has many ways of representing death – the skull, or “calavera,” and “Catarinas,” dressed-up female skeletons, are two such ways.

“Since the Aztecs, we’ve been laughing at death,” Alvarez said.

The calaveras and Catarinas are placed on the memorial altar along with other items cherished by the deceased beloved. It might be tequila or a pack of cigarettes, but those are always accompanied by the departed’s favorite foods.

“It’s more of a lived popular religiosity than Catholicism,” Father Martin Paredes Apolinar, a priest at the town’s Our Lady of the Nativity Parish, said of the Day of the Dead.

“Here, the word Halloween doesn’t exist, but instead the Time of Calaveras,” he explained in an interview with a reporter visiting from The Catholic Sun, newspaper of the Phoenix Diocese.

Father Paredes said the tradition grew out of an Aztec belief in Mictlantecuhtli, the god of the dead. After the Spanish brought Catholicism to the area, the Aztec belief blended with All Souls’ Day.

But for many, the religious custom is a simply an extension of their Catholic faith.

“The Catholic faith is the only one that commemorates the dead this way, not the other religions,” Barcas said. “We’re welcoming our deceased loved ones.”

Ana Elisa Rodriguez, who works with the local church, said it wasn’t pagan, either. Children in Tepoztlan are forbidden to dress up as witches, she said, and if they do, they don’t get any candy.

Flowers are used to lead the spirit of the deceased loved one to the memorial altar with their sweet fragrance, Rodriguez said. A candle is left so that the loved ones can make their way back to purgatory.

Mass is celebrated at the cemeteries Nov. 2. After visiting the graves, family members return home to eat food from the memorial altars. A lot of it is fruit, which is also given to children who come to ask for calaveras.

The tradition is being handed down to future generations through family and schools. Many schools host ofrenda contests, judging the best memorial altar while teaching the significance of each item.

“The violence affects many people,” Rodriguez said. “But everyone has lost a loved one in some way. Dia de los Muertos helps us keep their memory alive.”