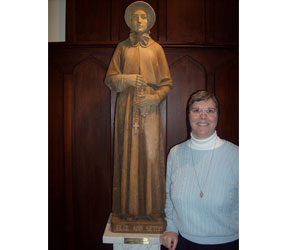 When she decided to attend Seton High School with her best friend, she was simultaneously drawn to the real presence of the Eucharist and the Daughters of Charity at the school. Soon, she began to wonder what it would be like to be a sister.

“Of course I dismissed it because I thought, that’s crazy, you’re not even a Catholic – but I couldn’t stop thinking about it,” she said.

She took religious instruction and joined the Catholic Church on June 3, 1971, when she was 16 years old. Although she soon began attending vocation retreats, she grappled with the idea of joining consecrated life because she wanted to “get married and have 10 children.”

“Finally one day, I was just struggling and I said, OK, God, whatever you want, I’ll do,” Sister Mary Catherine said. “I just felt a peace, and I knew that I was being called.”

In 1974, the 19-year-old entered the Daughters of Charity with her parents’ loving support.

She started her vocation work four years ago, when she served as vocation director of the province. She was appointed to the Provincial Council, which leads the province, nearly two years ago.

“Getting to know more sisters in the province on a deeper level is really special in this ministry,” she said.

Sister Mary Catherine visits the sisters in the various missions of the province in order to offer support and guidance. As the liaison between the vocation office and the provincial council, she supports the vocation director. She also serves on boards and committees.

She said it is “awesome” to try to inspire the approximately 160 Daughters of the province through formation opportunities.

She also works with the newest members of the Daughters of Charity.

“I find them a breath of fresh air,” she said. “They’re so full of life and so full of joy that they’re a real inspiration to me.”

She meets with them on a regular basis and makes sure they’re getting the right theology courses and the training they need to serve people in poverty, she explained.

Sister Mary Catherine said women considering consecrated life sometimes ask her: Well, how do you know for sure?

“I don’t know that you know anything for sure. When you meet a young man and you fall in love, are you sure this is going to last forever? You know you want it to, but are you sure? No. None of us – we can’t be absolutely positive,” she said. “We have to take a day at a time.

Before her vocations work, Sister Mary Catherine served as a teacher for many years, spending most of her time working with kindergartners through second-graders in Maryland, Virginia, West Virginia and North Carolina.

“I found that to be so special,” she said. “I just loved being around children.”

Sister Mary Catherine recalled being apprehensive about leaving the teaching ministry she loved. However, the Daughters’ call is to be sent where they’re needed, she explained. She said she has learned new things about herself through her missions, and she can look back and see why God sent her.

“I do believe God calls us to be where we are,” she said. “If we’re faithful to that calling, we get the graces we need to get through the difficult times.”