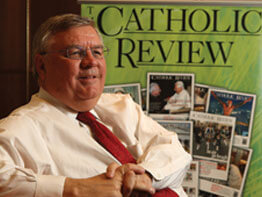 Daniel Medinger broke into the news business at age 10.

Reporting on stolen bicycles and the introduction of pumpkin-flavored ice cream at the neighborhood ice cream parlor, he posted handwritten articles on telephone poles and in the windows of local businesses in La Crosse, Wis.

For a cub reporter, there was no greater thrill than hearing feedback from neighbors who learned from his reports.

That youngster’s combination of curiosity, determination and entrepreneurialism was a small foretaste of what would come later.

As associate publisher/editor of The Catholic Review for 24 years, Mr. Medinger transformed a once-struggling newspaper into one of the most honored publications in the Catholic press. Circulation grew from nearly 40,000 when he arrived to nearly 60,000 today. His staff collected more than 350 national and regional awards. The paper recouped losses from the previous two decades, and modern technologies were introduced.

Under Mr. Medinger’s leadership, The Cathedral Foundation that oversees The Catholic Review also grew considerably. It began publishing the weekly English edition of L’Osservatore Romano, the Vatican newspaper, for the United States and Canada. It also ventured into book publishing through the Cathedral Press. Other enterprises included a printing service and Advertising Media Plus (AMPs), a full-service advertising, marketing and communications agency.

Armed with a master’s degree in journalism from Marquette University in Milwaukee, Mr. Medinger arrived in Charm City in 1986. He had already worked at several newspapers and brought experience in the Catholic press as editor of The Times-Review in La Crosse and The Catholic Bulletin in St. Paul, Minn.

Mr. Medinger recalled that it was his answer to an interview question from Archbishop William D. Borders about whether Catholic newspapers could be successful that helped him land a job in Baltimore.

“My answer came out of the blue,” Mr. Medinger said. “I told the archbishop that the biggest news of all time was not that Jesus is the son of God who lived, died and rose. The biggest news is that 2,000 years later people believe it and it impacts their lives.”

In reporting what he called “the Catholic story,” the parishioner of the Church of the Resurrection in Ellicott City said he has tried to focus on how Catholics live their faith.

Sometimes that meant venturing to places like Cuba, to report on the distribution of medical supplies by Catholic Relief Services, or to Gonaives, Haiti, to chronicle the partnership between the Baltimore and Haitian dioceses. Other times, it meant reporting from down the street on how volunteers selflessly toiled in the pro-life movement.

“I’ve learned that whether you’re celebrating Mass somewhere in Ethiopia or San Salvador or Haiti or East Baltimore, it’s the universal church,” Mr. Medinger said. “Experiencing so much of the richness of that church has been one of the privileges of this job.”

Although Mr. Medinger was thrilled to meet Pope John Paul II, Pope Benedict XVI, Blessed Mother Teresa of Calcutta, President Bill Clinton, Dorothy Day and Cesar Chavez, he said he has been most moved by encounters with everyday Catholics who work hard on parish councils, school boards and church ministries.

“When you go to a parish and it’s 8:30 on a Thursday night and they’re trying to figure out how to help the parish move forward,” Mr. Medinger said, “that’s a source of inspiration.”

Throughout Mr. Medinger’s tenure, according to Archbishop Borders, he has shown a “real knowledge of Catholic doctrine and a sense of the needs of the parishes.”

“He’s been very consistent,” said the retired archbishop, noting that Mr. Medinger produced a good paper by developing a good staff. “He hasn’t gone overboard one way or another, and he has a real insight into the objectives of the paper.”

In a statement announcing Mr. Medinger’s resignation, Archbishop Edwin F. O’Brien said that “during Dan’s 24 years of faithful service, The Catholic Review has continued to build on its historic legacy as one of the finest weekly Catholic newspapers in the country.”

As editor, Mr. Medinger introduced a weekly column dedicated to the experiences of African-American Catholics. He oversaw the transition from a broadsheet to a tabloid format, and he wasn’t afraid to address controversial issues.

“Hardly a day goes by when a legislator doesn’t say, ‘I saw something in The Catholic Review that I want to talk to you about,’” said Ms. Russell, who represents the state’s Catholic bishops in Annapolis. “They (legislators) pay attention. Dan’s leadership in making that voice heard has been unparalleled.”

Mr. Medinger said he believed that readers had a “right and a legitimate claim” to be participants in the public square. He insisted that news stories in The Catholic Review not just cover the issues but also “name names.”

“I had excellent staff writers I could trust who gathered information and made sure we had the facts right,” he said. “Once you’ve got your facts, it’s time to go to press.”

Mr. Ryan pointed out that his former boss, a champion wrestler in high school, brought tenacity to his position.

“He’s not reluctant to grab a problem and grapple with it until he finds success,” said Mr. Ryan, now the associate editor of The Dialog, newspaper of the Diocese of Wilmington, Del. “He’ll hold on and won’t let go until he figures out how to solve the problem.”

Mr. Medinger set very high standards for his staff, Mr. Ryan said, and he has been “completely committed to the church.”

Mr. Medinger said he is deeply grateful to Archbishop Borders, Cardinal William H. Keeler and Archbishop O’Brien, each of whom served as publisher of The Catholic Review. They provided immeasurable support to himself and the staff of the Cathedral Foundation, Mr. Medinger said.

He spoke in the third-floor conference room of The Catholic Review’s headquarters on Park Avenue, a handsome brick building that Mr. Medinger, with the support of the foundation’s board of directors, acquired, renovated and paid off during his tenure as associate publisher and editor.

“The people who have served on the board of directors are the real heroes in what has happened here,” he said. “They gave freely of their time and energy and knowledge – and I took their direction.”

Mr. Medinger said he is excited to remain in Baltimore as he and his wife direct AMPs, which is now headquartered in Towson.

“It’s been an amazing run,” Mr. Medinger said. “It’s been more than I could have ever hoped for, and I’m happy to have had the opportunity to be of service to others.”
Click here to read a newsroom blog about Mr. Medinger.