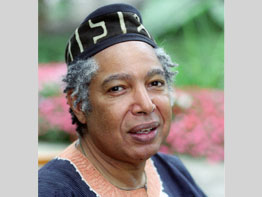 WASHINGTON – Cyprian Lamar Rowe, a social justice activist, poet, author and leading figure in the African-American Catholic community in the U.S., died Nov. 25 at Gilchrist Hospice Care in Towson, after a long illness. He was 74.

A funeral Mass for Rowe was scheduled for Dec. 6 at St. Peter Claver Catholic Church in Baltimore.

Mr. Rowe is the former executive director of the Washington-based National Office for Black Catholics, 1978-80, and the National Black Catholic Clergy Caucus, 1981-83.

He was a Marist brother for 46 years before leaving the order and the church in 1997 to join Imani Temple, a breakaway African-American Catholic community founded by Archbishop George A. Stallings Jr., a former Catholic priest.

At the time Mr. Rowe was a professor in the University of Maryland’s Graduate School of Social Work in College Park, and a research associate in the psychiatry department of Johns Hopkins University in Baltimore.

He said his “very painful” decision to leave the Roman Catholic Church to spearhead the theological education of the Imani Temple’s priests and seminarians was not an issue of race. “It’s an issue of culture,” he said. “It’s an issue of how do we African-American people tend to what the Lord’s saying to us, through the genius of our people.”

“In a sense I will always be a Marist brother,” he said. “I was shaped by the spirituality of (Marist founder) Marcellin Champagnat. That will never change.”

In 2000, however, Rowe renounced all association with Imani Temple, saying he made a lot of ill-advised decisions following the death of his 81-year-old mother in 1996 and joining Imani Temple was one of them.

“I had the false notion that by reconstructing everything in my life, in some magical way I would feel less pain over the loss of my mother,” said Mr. Rowe in a 2000 interview with Catholic News Service.

He met privately that year with Cardinal James A. Hickey of Washington. “He embraced me so hard he nearly took the wind out of me, and then he said, ‘Welcome home,’” Mr. Rowe recalled, adding, “I was almost in tears.”

Mr. Rowe also asked to re-enter the Marist community, but was refused.

At the height of his career, Mr. Rowe was called on for his perspective on major events affecting African-American Catholics, whether it was being asked for reaction to the naming of a black bishop, or condemning racism in both church and society, or citing where the community’s focus should be in the wake of disturbing news.

Mr. Rowe, whose birth name was Donald, was born Sept. 27, 1935, in Dalton, Ga., the only child of the late Helen Brewington and Luther Rowe. He chose the name Cyprian when he became a Marist brother in 1951 at age 15; he was the first black member of his province.

He earned master’s degrees in English and comparative literature from Marist College in Poughkeepsie, N.Y., where he taught for two years. He also had a master’s degree and a doctorate in African studies from Howard University in Washington.

In the early ‘70s he studied African culture firsthand by living in a small village in Ghana. He described the African spirit as one “of community, a spirit of sharing. It is a spirit of ‘we,’ not ‘I.’“

On one of his many trips to Africa, he met and subsequently adopted Kweku Attah Rowe, who later married and had two children whom he named Cyprian and Helen. He preceded his adoptive father in death.

Mr. Rowe is credited with designing and directing the first African-American studies program at the University of Rhode Island, 1972-74, and at Temple University in 1978.

In 1981, when Mr. Rowe became executive director of the National Black Catholic Clergy Caucus, he also earned a master’s degree in social work from The Catholic University of America in Washington. He then became a psychotherapist at the Johns Hopkins Hospital in Baltimore.

Until his retirement in 1999, Mr. Rowe taught at several institutions, including Loyola University in Chicago and the University of Maryland’s School of Social Work.

He is survived by his grandchildren, Cyprian and Helen Rowe of Ghana; a cousin, Ernestine Mills of New York, N.Y.; an aunt, Lottie Jackson of Cleveland; and several nieces and nephews.