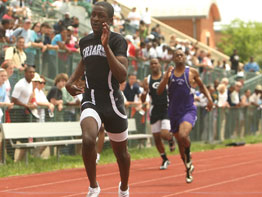 The final score of one of the closest meets in MIAA championship history was 112 for Archbishop Curley and 109 for Mount St. Joseph.

The excitement grew with one race left in the meet, the 1,600-meter relay, and the Friars needed to finish in third place or better to secure the title.

Curley also was assisted by senior Jerome Junior and junior Eric Franklin, who was part of the winning 800 relay team. Junior won the high jump and scored decisive points for the Friars by coming in second in the long jump. Franklin also won the 110-meter hurdles with a fully automatic time of 14.85, finishing the year undefeated in this event.

The Gaels almost pulled off the win in large part because of junior Dorian Johnson, who finished second in the triple jump and first in the long jump. Senior Markeith Price also did well by placing second in the 800.

While the Friars and Gaels battled for top honors, Calvert Hall senior Pat Boyle broke the MIAA shot put record with a distance of 57 feet, 2 inches.

Prior to the meet, seniors from each team were recognized for their achievements, hard work and dedication.