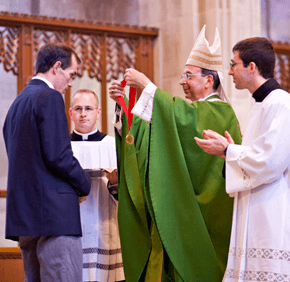 Matthew Marshall likens his pro-life work outside abortion facilities to being at the base of the cross at Calvary.

“When we go out to the site, you try to take the idea that you’re Mary Magdalene and John the Evangelist at the foot of the cross,” said Marshall, a parishioner of St. Thomas Aquinas, Hampden.

Marshall and Mary Bergin, also a St. Thomas Aquinas parishioner, each received the Culture of Life Medal of Honor Oct. 7 from Archbishop William E. Lori during the annual Respect Life Mass at the Cathedral of Mary Our Queen, Homeland.

To see a Respect Life Sunday slideshow, navigate the arrows below.

In 2008, Marshall founded “Helpers of God’s Precious Infants of Maryland,” a volunteer group that prays and offers sidewalk counseling outside abortion facilities. He was inspired by a similar group in New York. Bergin joined the group as a counselor approximately three years ago.

The sidewalk ministry is about prayer, not protest, Marshall said.

“It’s important that people remember the spiritual focus when we’re fighting a spiritual battle or a spiritual endeavor,” Marshall said.

Bergin said her pro-life work is “100 percent
coming as a vocation through God.”
“The prayers are so important and by praying, (God) just works miracles, he changes their (women’s) hearts,” said Bergin, who added she doesn’t feel deserving of the award, but accepts it “on behalf of all prayer warriors and sidewalk counselors to glorify the name of God.”

Eighteen people have received the award since 2000 when it was first presented, said Linda Brenegan, director of the Archdiocese of Baltimore’s Respect Life office. Cardinal Edwin F. O’Brien selected Bergin and Marshall as this year’s recipients when he was the archbishop of Baltimore.

“These two people have been so dedicated,” Brenegan said. “They’ve given up their time and personal resources for the past several years … and have really impacted so many people’s lives.”

During the Mass, Archbishop Lori called the congregation his “coworkers in defending and fostering human life.”

“My heart is filled with gratitude for you,” he said.

“The pro-life movement is young,” Archbishop Lori said. “It’s alive and the Lord is with us.”

In his homily, Archbishop Lori said marriage is between one man and one woman and that it is in marriage that children can be brought into the world.

Archbishop Lori called marriage “unique for a reason” and said “there is a direct connection between the dismantling of marriages and the family structure and the scourge of abortion in our society.”

“Children suffer when they are deprived of a sound family structure,” Archbishop Lori said.

During Respect Life month, activities include the 40 Days for Life campaign, Sept. 26-Nov. 4 – a period of prayer and fasting in support of life. This year’s theme for Respect Life month is “Faith opens our eyes to human life in all its grandeur and beauty.”