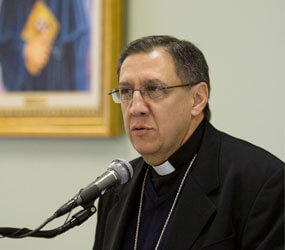 MIAMI – The Cuban government may have missed a deadline to release 13 prisoners of conscience detained in Cuba, but the work of the church on their behalf – and for all prisoners on the island, regardless of their offense – will continue, said Cuba Bishop Arturo Gonzalez of Santa Clara during a news conference Nov. 8 in Miami.

The Cuban church, led by Havana Cardinal Jaime Ortega, has been successfully negotiating the release of Cuban prisoners of conscience since this past summer, when the death of one of the prisoners, who was on a hunger strike, and the rough treatment of the Ladies in White, a group of women who protested peacefully each Sunday in Havana, brought international condemnation to the Castro regime.

So far, thanks to the intervention of the Cuban church, 39 from a list of 52 dissidents have been freed and repatriated to Spain along with more than 200 of their relatives. However, some of the dissidents have said they want to be released and allowed to remain in Cuba.

He said the work of the church on behalf of the prisoners has been ongoing, “effective” and not always public.

“We have the promise that this process of the liberation of prisoners will continue,” Bishop Gonzalez said. “Already a good number of prisoners have obtained their freedom, not only those of the group of 75.”

That number refers to the number of dissidents taken prisoner during a Cuban government crackdown in the spring of 2003. Shortly thereafter, the Ladies in White, who are wives and mothers of those who were imprisoned, began their marches through the streets of Havana. Typically, the women began their marches after attending Mass at a Havana church.

Bishop Gonzalez stressed, however, that the work of Cuba’s church on behalf of prisoners is not a recent phenomenon and not limited to dissidents.

“It has been going on for a long time,” he said. “The church is working with prisoners of every type and also with their families.”