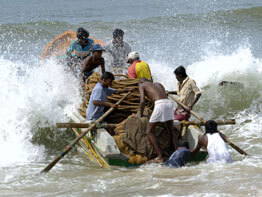 COLOMBO, Sri Lanka – Catholic Relief Services’ staffers have to overcome political obstacles as they try to help the people of Sri Lanka rebuild three years after a tsunami hit, said a CRS official.

Ms. Bousquet said uncertainty about whether affected families would be allowed to rebuild near the beach was one problem.

The government quickly established a buffer zone, seeking to ban all rebuilding along the coastline and insisting that new houses be rebuilt inland, away from any danger of future tsunamis. But many fishing families resisted being forced to relocate so far from their boats and other equipment and criticized the fact that many hotels were not subject to the same restrictions.

“The buffer zone is only for the poor,” said G.K. Siripala, a fisherman who lives in a 26-dwelling housing project built by the local Catholic organization Caritas Sri Lanka in Damsirigama.

Ms. Bousquet said some people simply refused to move away from the beaches.

“They set up their shacks and said, ‘I’m not moving from here.’ And they waited the government out,” she said. “As that pressure has built up over time, the government has lessened the buffer zone restrictions to allow people to go back, if not all the way to where they lived before, at least closer. But all that uncertainty about the buffer zone, the fact that the goal posts kept moving, slowed down the decision-making process about where we could help people rebuild.”

The Dec. 26, 2004, tsunami killed 35,000 people in Sri Lanka and left more than half a million homeless. In addition to that natural disaster, the rebel Liberation Tigers of Tamil Eelam have been fighting the government for autonomy for ethnic Tamil areas in northern and eastern Sri Lanka since 1983. The conflict has left around 70,000 dead.

“The church works throughout the country, so parish priests work in both (government-controlled and rebel-controlled) areas. They help needy people on all sides of the conflict,” she said.

Ms. Bousquet said CRS’ work “gets complicated” because funds it receives from the U.S. government cannot be used in rebel-controlled zones. Since 1997 the State Department has classified the Tamil rebels as a foreign terrorist organization. Last month the U.S. government froze the U.S.-held assets of the Tamil Rehabilitation Organization, a charitable organization associated with the rebels.

However, there are fewer restrictions on private funds that CRS receives, Ms. Bousquet noted.

“Everything we do here is through the church. We’re here as advisers to their program. If they need resources or technical support, we help them,” she said. “They may need educational supplies, uniforms or books for kids who are displaced in order for them to continue their schooling. We can support them with our resources, but not with U.S. government resources.

“For us it’s not about the warring factions, but about the civilians who are caught up in the conflict,” she said.

Ms. Bousquet said CRS disregards the politics of who gets what “in order to look just at the humanitarian side of things.”

“It’s not their fault that they’re caught up there. They were born there, they’ve lived and farmed there. Their life is there. But because of the fighting they’re caught between a rock and a hard place, with nowhere to go,” Ms. Bousquet said.

She said CRS focuses on getting resources to the priests and other church workers on the ground who are doing what is often dangerous work.

“We may not be able to get there, I may not be able to travel there personally, but we know the work of the church here and we support its work. And they’re risking their lives. We’ve seen priests get killed while doing what they can to help their people. And we’re there to support them,” Ms. Bousquet said.