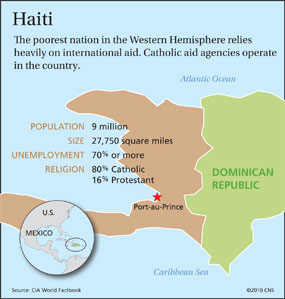 WASHINGTON – Catholic Relief Services was preparing for “thousands and thousands” of dead and injured people in the wake of the most devastating earthquake to strike Haiti in two centuries, said Karel Zelenka, the agency’s country representative.

In an e-mail from the capital, Port-au-Prince, Zelenka told his colleagues at CRS headquarters in Baltimore that damage was “incredible all around.”

Robyn Fieser, CRS regional information officer, shared part of Zelenka’s message with Catholic News Service Jan. 13 and said Zelenka wrote that the Haitian government has not made any announcement about rescue and recovery efforts.

“On the radio stations there has been only wild music,” Fieser said Zelenka wrote. “People have been screaming and chanting all over the place. People are chanting and praying. It’s the disaster of the century.”

Zelenka reported that the only rescue efforts he and his staff have seen are by people digging through rubble with their hands.

Cell phone service has been sporadic, with calls lasting only a minute or so, making it difficult for CRS staff to communicate with each other, Zelenka said.

CRS international staff were safe and accounted for; however, some local CRS employees had not been heard from since the earthquake hit shortly before 5 p.m. local time Jan. 12, Fieser said. CRS offices survived the magnitude 7 temblor, but an office building across the street collapsed, she said.

The quake was felt as far away as eastern Cuba, where houses shook but there were no reports of significant damage.

“We felt it very strongly and I would say for a long time. We had time to evacuate,” Archbishop Dionisio Garcia Ibanez of Santiago, Cuba, president of the Cuban bishops’ conference, told the Associated Press.

Bishop Thomas G. Wenski of Orlando, Fla., home to 80,000 Haitians, told CNS he had been in touch via e-mail with Archbishop Bernardito Auza, the Vatican’s apostolic nuncio in the country.

“He tells me the devastation is incredible,” Bishop Wenski said. “He said he toured the city last night and it was quite devastating. Priests and nuns were in shock.”

Archbishop Auza told the Vatican missionary news agency Fides that 100 priests and seminarians also were killed. The clergy, members of the Montfort order, were in Port-au-Prince on retreat.

The U.S. government and relief agencies were mobilizing quickly to provide assistance to the devastated area around the Haitian capital. The quake’s epicenter was about 10 miles southwest of the capital. It was the country’s worst quake in two centuries.

At the White House, President Barack Obama offered his thoughts and prayers to the Haitians.

“We are closely monitoring the situation and we stand ready to assist the people of Haiti,” he said.

U.N. Secretary-General Ban-Ki Moon confirmed Jan. 13 that at least five U.N. staffers were killed and that more than 100 were missing, including the Tunisian head of the world body’s mission in Port-au-Prince.

CAFOD, the overseas development and relief agency of the Catholic Church in England and Wales, immediately pledged $162,000 for water, food, medicine and shelter for victims in the worst affected areas.

A special Mass to pray for victims was scheduled for Jan. 13 at the Cathedral of St. Mary in Miami.

Information about injuries, fatalities and damage was difficult to obtain because major communication links were destroyed in the disaster.