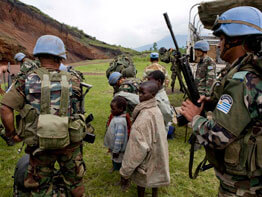 WASHINGTON – Although two Catholic Relief Services workers in eastern Congo have been evacuated to neighboring Rwanda amid the escalating conflict, they are planning to return to another part of the country as soon as possible to help with relief efforts, said a CRS official.

“This was not a formal evacuation,” said Paul Miller, Africa policy adviser for CRS, the U.S. bishops’ aid and development agency. He said the two workers, who were evacuated Oct. 30, happened to be in the violence-torn region after working on a nearby water-assessment project.

CRS officials decided Oct. 29 that the workers should leave the area when the “situation became quite tense,” said Miller, referring to incidents of government soldiers shooting civilians that night in Goma. The next morning, the workers walked across the border into Rwanda, where they were picked up by a CRS vehicle.

Eastern Congo’s proximity to Rwanda and the region’s mineral wealth have contributed to the ongoing violence in the region. The 1994 ethnic genocide of Tutsis by Hutus in Rwanda spilled over into Congo, and since then Rwandan rebels and Tutsi militants have been fighting the Congolese army, despite a cease-fire signed in January.

The hostilities have caused thousands of deaths and displaced more than 200,000 civilians who currently are fleeing south from the violence in the area north of Goma.

“We certainly thought it was wise to move them away from this hot spot for few days,” Miller, who is based in Baltimore, told Catholic News Service Oct. 30.

But he said CRS staffers are now concerned about how these workers “can get back in” the country to help those injured and displaced by the violence. The workers are hoping to return soon to eastern Congo’s southern city of Bukavu where other CRS workers currently are based.

He noted that although CRS does not have a presence in Goma it plans to cooperate with partners in the region such as Caritas Internationalis, the international umbrella group of Catholic aid agencies.

He also said CRS has been “trying to raise alarms” about the situation in eastern Congo with U.S. government officials, stressing the urgent need for more diplomacy.

She said the agency plans to engage in long-term development in the region to “create alternatives for young soldiers and rebuild the livelihoods of the displaced. This will be especially important,” she said in an Oct. 30 e-mail to CNS, “as peace-building will take a long time in this country.”

Meanwhile, the Congolese bishops’ conference urged the international community to pressure Congolese armed groups to “respect the commitments” they have made and the Congolese government to re-establish peace in the country.

“A real humanitarian drama is unfolding before our eyes and can leave no one indifferent,” said the bishops.

The international community has the means to take effective measures to ensure that the armed groups respect the cease-fire accords they have signed, the bishops said in an Oct. 13 statement.

The bishops noted that, in addition to the displacement of thousands of civilians, children have been kidnapped and forced to enroll in Laurent Nkunda’s rebel movement of Congolese Tutsis known as the Banyamulenge. Nkunda, who deserted the Congolese army in 2003 and formed his own rebel group, claims he is defending the Banyamulenge against further attacks by Rwandan Hutus. The Rwandan Hutus participated in the Rwandan genocide against Rwandan Tutsis in 1994, then fled into neighboring Congo.

Nkunda is believed to be backed by Rwanda.

But the Congolese bishops said they fear “that these recurring wars in the east and northeast are being used as a screen to cover up the pillage of natural resources, because the fighting is carrying on in places where natural resources are exploited and where certain people would like to continue illegal exploitation.”

The United Nations and a broad range of international human rights groups have linked the war in Congo to an illegal trade in minerals, including gold, coltan and tantalite, the mineral that is used to make cell phones and laptop computers. Various armed groups vie for control of the mines, and the continued unregulated mining activities fuel the war between the different armed groups, including the official Congolese army.

The head of the U.N. mission in Congo, Alan Doss, called on the international community Oct. 29 to provide reinforcements for the 17,000-strong U.N. peacekeeping mission. Doss said the mission lacks the resources to deal with the situation in Congo, a vast country the size of Western Europe.

The same day, Nkunda declared a cease-fire, calling on army troops to do the same. Nkunda told the BBC he had decided to proclaim a cease-fire because the thousands of refugees pouring into Goma to avoid the violence were destabilizing the city.

Most analysts, however, believe that the fighting in the east will not end overnight and that there will not be peace until the different armed groups have been disarmed and the extraction of mineral resources has been regulated properly.

Cardinal Renato Martino, president of the Pontifical Council for Justice and Peace, issued an appeal Oct. 29 expressing hope that “the international community would intervene with all its weight in resolving the conflict under way, in particular by overseeing respect for the various peace accords that have been signed.”

The cardinal said the international community must recognize the threat the conflict poses for peace throughout the region.

And he called on those involved in the fighting to “choose dialogue and negotiations” as a way to resolve their differences, “putting the common good before selfish and partisan interests.”