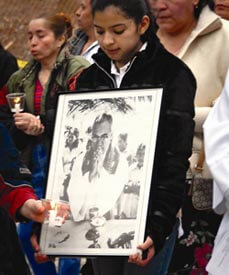 The moist air failed to dampen the spirits of the candle-holding faithful as they paid tribute to slain Archbishop Oscar Arnulfo Romero in a Fells Point procession March 24 that illuminated the streets and enlightened onlookers.

Patti Ferguson of Canton hadn’t heard of Archbishop Romero, who was murdered in San Salvador, El Salvador, while celebrating Mass in 1980, before seeing the convoy led by Father Robert F. Wojtek, C.Ss.R. The pastor of the Catholic Community of St. Michael and St. Patrick, Fells Point, led participants down Lombard Street on the 27th anniversary of the outspoken religious leader’s assassination.

As the group came to one of its stops to read the words of protest spoken by the late activist, Ms. Ferguson approached one of the participants to learn a little more about the martyred archbishop.

She was told the 61-year-old archbishop of San Salvador protested the government’s persecution of his countrymen and ultimately sacrificed his reputation and safety.

“What an amazing thing to run into,” Ms. Ferguson said, as she followed the procession from St. Michael’s to St. Patrick’s. “If I hadn’t been walking by here right now, I never would have known about this man. Now I want to know more.”

The rainy Saturday evening tribute held a special meaning for Towson resident Lucio Martinez, a Salvadoran who was living in his homeland in 1980 when the archbishop was gunned down.

“We would listen to him on the radio, and his words gave us hope that we would someday live without all of the violence,” said Mr. Martinez, a parishioner of St. Michael’s who was carrying a framed picture of Archbishop Romero. “It was a terrible day when he was killed.”

No arrests were ever made in the archbishop’s murder.

The police-escorted marchers sang in Spanish as a guitarist plucked the strings of his instrument.

Once at St. Patrick’s, they watched a historic dramatization of the slain archbishop’s life before entering the church for a special Mass.

Salvadorans and Latinos made up only a portion of the procession participants, which included people from a multitude of ethnic backgrounds and religious faiths.

The Rodgers Forge couple has traveled extensively through Central America and believes people of all faiths should remember Archbishop Romero’s campaign for justice in El Salvador as an example of true commitment to worldwide peace.

“We also wanted to expose our children to the culture of El Salvador,” Ms. Foster Connors said. “This isn’t the kind of thing they are going to see in Rodgers Forge.”

Others in the procession hope Oscar Romero will one day be canonized as the patron saint of El Salvador.

“He was a true martyr for the people of his country and his faith,” said St. Vincent de Paul, Baltimore, parishioner Maureen Daly. “We should never forget this man who sacrificed so much, only to be shot at the altar.”