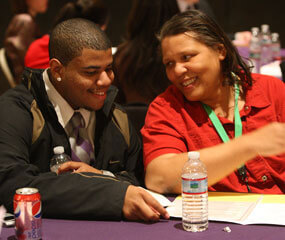 Eighteen years ago, Cornelia Ellis walked into Franklin Square Hospital and knew that she was about to be handed her adopted son, Chris. She looked at him and felt the weight of his future on her hands.

“It was so joyful and inspiring,” Cornelia said. “I held my arms out and he held his arms right back. He was up to the challenge. Everything just took off from there. There were such endless possibilities.”

Those prospects are becoming clearer these days for Cornelia and Chris. They were among the hundreds of family members inside Cristo Rey Jesuit High School’s gymnasium March 8 for the school’s “100 Days to Graduation” event.

It was an emotional night for the school’s first senior class, which The Catholic Review is chronicling during the 2010-11 academic year by telling stories of some of its members. The school’s mission is to prepare Baltimore City youth for college and the working world.

The class will graduate from Cristo Rey at the Basilica of the National Shrine of the Assumption of the Blessed Virgin Mary June 18.

During the “100 Days” gathering, families were shown a video that featured a series of baby photos of the students, which transitioned into pictures of them thriving at Cristo Rey. The school’s staff and family members, including Cornelia Ellis, shared messages of love and congratulations via taped messages. One senior, it was revealed in a tribute, would be the first of three sons to graduate from high school. Others overcame childhood physical impairments, poverty and tough neighborhoods.

Torres arrived at Cristo Rey just a few years removed from tragedy. His mother died following an automobile accident. He still thinks about his mother as he transitions to adulthood.

“It was tough, but we moved forward as best we could with the situation,” Torres said.

Torres watched much of the “100 Days to Graduation” event alongside Chris Ellis because his father had to work. Torres has a 3.45 grade point average and takes advanced placement classes, while busing tables and driving guest cars for the same restaurant where his father is employed. Along with Ellis, Torres has already been accepted to Mount St. Mary’s University in Emmitsburg. Torres is still awaiting word from other colleges.

One of the chief reasons for “100 Days to Graduation” was to inform families of the days ahead. Principal Tom Malone set the tone with a prayer.

“Lord, we thank you for the blessing of this wonderful school community that came together four-and-a-half years ago and is still together, holding strong and move toward graduation,” Malone said.

Malone set remaining academic expectations, while Lucy Neale Duke, director of college counseling, told students some colleges might not be happy with students coasting to graduation.

Chris Ellis admits to a brief case of senioritis, but he re-centered himself thanks to looking at some photos of his younger self.

Neale Duke said she would work with students and families to find college financial aid in the coming weeks.

Cornelia Ellis, a parishioner of Baltimore’s St. Peter Claver, is proud that her son has already received some scholarship money to attend the Mount. Still, there are significant expenses that remain for that school and she wonders how she will pay for it.

“I know we’ll work it out,” Cornelia said.

Cornelia and Chris have had their struggles, but their love has sustained them.

“Sometimes I feel like I really let him down,” Cornelia admits. “I don’t have enough money. I can’t give enough things, but Chris does not let that in. He just says, ‘I’m going to do the best I can with what I got.’”

She thinks back to the boy she held at the hospital 18 years ago and tears up at the thought of sending him to college.

“Intellectually I am ready,” she said. “Emotionally I hope I am. I know he has to go. I always knew he’d have to leave me.”