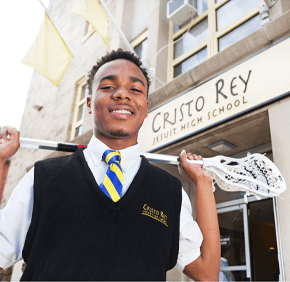 Elijah Miles was not satisfied with the academic rigor at a city public high school, so he transferred before his sophomore year to Cristo Rey Jesuit in Fells Point.

“I felt like I wasn’t being challenged,” said Miles, a Cristo Rey senior whose middle school was St. Ignatius Loyola Academy in Mount Vernon, another Jesuit institution.

At Cristo Rey, Miles is an honors student and enrolled in advanced placement and honors courses. He has been president of the Student Government Association since his junior year. Miles plans to major in college in political science, and aspires to be a Baltimore politician.

Through Cristo Rey’s corporate internship program, the 17-year-old works once a week and one Friday each month at Euler Hermes, a global financial services company in Owings Mills. During his junior year, he worked at The Harbor Bank of Maryland in Baltimore.

“It taught me about being professional and little things that as a kid you’d be nervous about,” Miles said.

A student leader for the Kairos spiritual retreat, a movement whose concepts are based in Ignatian spirituality, he recently helped lead a four-day retreat at Camp Letts in Edgewater for members of Cristo Rey’s junior class.

Miles credits his Catholic schooling with deepening his Christian faith.

“I was never really thinking about God before religion classes,” he said. “That really set me on a journey, trying to think about what I believe. I’m definitely thinking about it (faith) because I went to those institutions.”

He continued, “I pray a lot. I’m big on having a personal relationship with God. I try to be a better person day-by-day.”

Justin White, a theology teacher and director of community service and outreach at Cristo Rey, described Miles as someone “never afraid to ask the hard questions about the spiritual, economic, political and social issues existing in
our world.”

“He wants to know the why behind an ideal, doctrine (or) belief,” White wrote in an email to the Catholic Review. “The thing that separates Miles from many of his peers is his intense passion to want to make his community better.”

A two-year captain of the Hornets’ varsity lacrosse team, which plays in the Maryland Interscholastic Athletic Association C Conference, Miles is the first from Cristo Rey to be recognized in the Review’s Student-Athlete feature. A midfielder, he began playing the sport at St. Ignatius.

“Sometimes, with basketball and football, I feel like I jumped on the boat too late,” Miles said. “With lacrosse, I felt like I had something I would become good at.”

On most spring Saturdays, Miles and a select group of his teammates volunteer at Charm City Youth Lacrosse, which provides lacrosse skills training and mentoring to Baltimore City youths, according to the nonprofit’s website.

Matt Hanna, Cristo Rey’s lacrosse coach and a history teacher, called Miles inquisitive – on and off the field.

“When he started playing lacrosse,” Hanna said, “he wouldn’t just show up (on time), he would ask questions. When he volunteers, he asks a lot of questions. He’s the kind of kid I could introduce to donors or be a spokesperson for anything. He’s also a good motivator among the younger kids.”

IND senior is committed to service