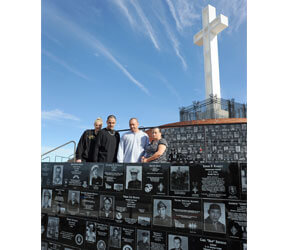 PASADENA, Calif. – A federal court has ruled that a cross on a San Diego hillside, as “presently configured,” conveys a message of government endorsement of religion and violates the Establishment Clause of the Constitution.

The order sends the case back to lower courts to decide whether the cross can remain on the piece of land now owned by the federal government and administered by the Defense Department.

The Jan. 4 ruling by a three-judge panel of the 9th U.S. Circuit Court of Appeals acknowledged that “no broadly applauded resolution is possible because this case represents the difficult and intractable intersection of religion, patriotism and the Constitution. Hard decisions can make good law, but they are not painless for good people and their concerns.”

The 43-foot concrete cross on Mount Soledad in the La Jolla section of San Diego has had a long legal history since the first, much smaller, wooden cross was placed there in 1913. Only since the 1990s, when litigation challenged the cross’s position on property then owned by the city of San Diego, has the site taken on any character of the veteran’s memorial that it is described as today, the court noted.

After federal courts in the 1990s ruled that the cross violated the state constitution’s guarantee of separation of church and state, voters approved selling the cross and its surrounding park to a memorial association. That sale was voided by courts, and subsequent efforts to sell to a private organization or to donate it to the U.S. Department of the Interior also were overruled for various reasons.

In 2006, President George W. Bush signed a law transferring the property to the Defense Department as a war memorial. The current lawsuit by the Jewish War Veterans of America and others challenges the predominance of the Latin cross as a religious symbol on public land.

The 9th Circuit panel did not order the cross’s removal; instead they sent the case back to a lower court to determine whether the property can be modified to pass constitutional muster or whether the cross will have to be removed.

“We are not faced with a decision about what to do with a historical, long-standing veterans’ memorial that happens to include a cross,” the court said in the opinion, written by Judge M. Margaret McKeown. Nor does the ruling have implications for military cemeteries with crosses and other religious symbols, the judges said.

“Instead we consider a site with a free-standing cross originally erected in 1913 that was replaced with an even larger cross in 1954, a site that did not have any physical indication that it was a memorial nor take on the patina of a veterans’ memorial until the 1990s, in response to the litigation.”

The judges said they do not discount the cross’s prominence in San Diego. “But a few scattered memorial services before the 1990s do not establish a historical war memorial landmark. … Resurrection of this cross as a war memorial does not transform it into a secular monument.”