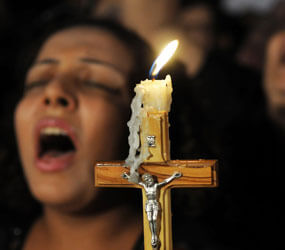 FRIBOURG, Switzerland – The patriarch of the Coptic Catholic Church in Egypt blamed Islamic fundamentalists for the increasing number of attacks on Christians and criticized a growing division between Muslims and Christians since the country’s February revolution.

Speaking Oct. 30 at St. Nicolas Cathedral in Fribourg, Switzerland, during a day of prayer for persecuted Catholics, Cardinal Antonios Naguib, Coptic Catholic patriarch of Alexandria, said the links between Muslims and Catholics that were reinforced in the period just after the revolution have deteriorated.

“Today, Islamic fundamentalists have come out of the woodwork, and there are recurring attacks on Christians,” Cardinal Naguib said.

The attacks left dozens dead and “created a gulf between Muslims and Christians, which is being continually widened under the influence of fanatical leaders,” he said during the event organized by the Catholic charity Aid to the Church in Need.

The cardinal said the unity that existed during the revolution, which saw Christians and Muslims praying together in churches and mosques for peace and a return to order, has virtually ended.

Cardinal Naguib pointed to the 2010 Synod of Bishops on the Middle East decision not to apply the word “persecution” to the plight of Christians in the region and said they have faced “prohibitions imposed by the Quran and Islamic Shariah law.”

Earlier, in an interview with the Aid to the Church in Need news agency, Coptic Orthodox Bishop Estaphanos of Beba, Samasta and El Fashn said “daily vexations” have included demands for a boycott of Christian shops and refusal to employ people “without veils over their heads.” He said he believed attempts were under way for a general expulsion of Christians.

“Christians in Egypt are experiencing their worst period in centuries – the Egyptian media are trying to cover up the attacks, so the international media won’t provide information about the real situation and there won’t be pressure from outside,” he told news agency.

About three weeks earlier, 30 Christians were killed and more than 320 injured by security forces during a protest against discrimination in Cairo’s Maspero Square.

The attack was the latest against the mostly Coptic Christian minority, which makes up a tenth of the 81 million inhabitants of Egypt, where the peaceful February revolution ended the 30-year dictatorial rule of President Hosni Mubarak.

In his Fribourg homily, Cardinal Naguib said evidence suggested the October Cairo incident had been planned. He said television reporters had “incited attacks against peacefully demonstrating Christians” and that Egyptian authorities later “blamed the Copts” for the violence.

“Acts of violence are being committed against Christians and churches, without action by the authorities or sanctions against the guilty,” he said.

In other violent incidents, 12 Christians were killed and almost 200 injured during the torching of two churches in Cairo in May, while a church was attacked in Aswan province Sept. 30.