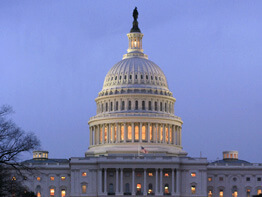 WASHINGTON – The previous Congress never got to vote on a full-scale rewrite of the 1996 Telecommunications Act. Some in the Republican-run House had hoped for a vote during the post-election lame-duck session, but the shift of power to the Democrats scuttled that possibility.

Now, with Democrats in charge, what could a new telecommunications bill look like?

There is the possibility of including language guaranteeing equal access to the Internet by content providers, a concept known as “net neutrality.”

Net neutrality – short for network neutrality – is the policy of keeping the Internet open to all lawful traffic by requiring that cable and telephone companies operate their Internet networks in a nondiscriminatory manner. It bars those companies from prioritizing Internet traffic to benefit their own content.

The U.S. Conference of Catholic Bishops came out last year in support of net neutrality. So did an estimated 1.5 million others who feared Internet service providers would charge Web sites extra to guarantee speedy access for users. With no safeguards for net neutrality, the USCCB and other church and community groups fear noncommercial religious and other speech on the Internet is threatened.

Net neutrality was guaranteed – at least for two years – in the AT&T-BellSouth merger approved by the Federal Communications Commission at the end of last year.

“We can’t do our work if we don’t have net neutrality,” said Anthony Riddle, executive director of the Alliance for Community Media, during a January media reform conference in Memphis, Tenn.

“Unless Congress requires telephone and cable companies to act as neutral providers of Internet access, as they had been required to do since the birth and through the spectacular growth of the Internet, those companies will use their control over Internet access to speed up or down connections to Web sites to benefit themselves financially,” said Bishop Gerald F. Kicanas of Tucson, Ariz., then chairman of the U.S. bishops’ Committee on Communications, in a letter last May to members of Congress.

“If the Internet becomes – as it inevitably will without strong protections for net neutrality – a medium where speakers must pay to deliver their messages, religious speech will be effectively barred from the Internet,” he added.

“Victories have histories,” said Mark Cooper, director of research at the Consumer Federation of America, adding the net-neutrality battle has been waged in some form or other for the past 40 years, when AT&T had a near-nationwide monopoly on telephone lines.

Then, Mr. Cooper said, federal regulators noticed a lot of data was being transmitted over phone lines and wanted to ensure the data was secure and that all could have equal access to the phone lines for data transmission. AT&T balked, Mr. Cooper added, but ultimately gave in.

“It’s unlikely there will be a big push for federal (video) franchising legislation,” which would permit phone companies to compete nationwide with monopolies that municipalities are granting to cable television companies, said Gene Kimmelman, vice president for federal and international affairs at Consumers Union, publisher of Consumer Reports magazine. “In Washington, you usually can’t push a bill without some major corporation’s push behind it. And there is none for franchising.”

According to Gigi Sohn, co-founder and president of Public Knowledge, an open-access advocacy group, matters of copyrights, patents and intellectual property “need reform every bit as much as (media) ownership and net neutrality.”

Noting that lawsuits against those who download music from the Internet have become more common, Ms. Sohn said by using a copyrighted song as the soundtrack to a home video that gets posted on an Internet sharing site such as YouTube, “you could be subject to a huge lawsuit.”

Ms. Sohn recalled when, a couple of years ago, Sony/Bertelsmann sold CDs without telling buyers the disc had been encrypted with a program designed to prevent copying. The program acted as a virus, crippling the CD buyers’ computers. “They’re still paying for that” in terms of an ongoing slide in CD sales, Ms. Sohn said of the record companies.

Moreover, with the switch in party control, new committee and subcommittee chairs will determine how legislation is shepherded through Congress.

Rep. John Dingell, D-Mich., chairs the House Energy and Commerce Committee. He ran the committee for 14 years until the Republicans took control of the House in 1995.

Rep. Ed Markey, D-Mass., chairs the House’s telecommunications subcommittee. Rep. Henry Waxman, D-Calif., who chairs a government oversight and reform subcommittee, is seen by David Hatch of the National Journal magazine as a defender of low ownership caps for media corporations. The 1996 law expanded the caps, particularly for ownership of radio stations.

The FCC in October approved the unlicensed use of white spaces by consumer electronics, rather than licensing or auctioning the spaces.

Further, “there’s a great failing to give first responders whatever they want on the spectrum” so they can deal with large-scale catastrophes, even five years after the Sept. 11, 2001, terror attacks, Mr. Cooper added. This has resulted in public-interest requests for spectrum that is being given “short shrift,” he said.

Mr. Riddle urged continued organizing by coalitions to push an agenda through Congress. “Big corporations have money; money is its own organizer,” he said.