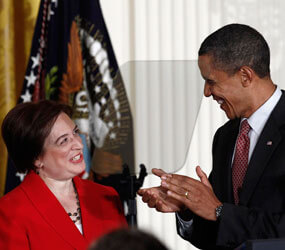 WASHINGTON – Solicitor General Elena Kagan was set to take a seat as the third woman on the current Supreme Court in October after the Senate confirmed her Aug. 5 in a 63-37 vote.

After a swearing-in ceremony at the high court Aug. 7, Kagan, 50, will take the bench Oct. 4, filling the seat left vacant by the June retirement of Justice John Paul Stevens at age 90.

Kagan’s confirmation was hailed by President Barack Obama, who nominated her, as “an affirmation of Elena’s intellect and accomplishments” as well as of “her character and her temperament; her open-mindedness and evenhandedness; her determination to hear all sides of every story and consider all possible arguments.”

Critics decried Kagan as being too political – she worked in a political position for the Clinton administration – and lacking in judicial experience.

“Elena Kagan’s record indicates that she will be an agenda-driven justice, deciding cases on her own political and social ideology rather than the Constitution,” said Charmaine Yoest, president of AUL Action, the political arm of Americans United for Life, in testimony to the Senate Judiciary Committee July 1.

Opposition to Kagan’s nomination failed to gain traction, perhaps in part because she lacks a trail of judicial opinions. Criticism focused on the fact that she has never served as a judge lost steam in May when Justice Antonin Scalia said he was pleased that a nonjudge had been nominated. He pointed out that when he took the bench, three fellow justices had no previous judicial experience.

“William Rehnquist came to the bench from the Office of Legal Counsel,” Scalia said in the second annual Thomas A. Flannery Lecture at the U.S. District Courthouse, where Scalia and the late Flannery were judges together. “Byron White was deputy attorney general. And Lewis Powell, who was a private lawyer in Richmond (Va.) and had been president of the American Bar Association.”

Others, such as Yoest, sought to derail the nomination on the basis of memos Kagan wrote while a political adviser to President Bill Clinton and on her decision while dean of Harvard Law School to continue the school’s decades-old policy prohibiting military recruiters in the Office of Career Services. The bar was rooted in the school’s anti-discrimination policies, over the military’s “don’t ask, don’t tell” approach to keeping homosexuals from serving in the military.

Yoest said Kagan’s career in politics shows her to be “a committed pro-abortion ideologue.” Yoest pointed to Kagan’s memos in the Clinton administration on topics including then-pending regulations and legislation on abortion, saying “we believe that Ms. Kagan’s agenda-driven judicial philosophy makes her unqualified to serve on the court.”

Kagan was named solicitor general by Obama early in 2009, coming to that job from Harvard Law School, where she had spent 10 years, first as a professor and then as dean. Before that, she worked in the Clinton Administration as associate White House counsel and as a domestic policy aide. From 1991 to 1995, Kagan was a professor at the University of Chicago Law School, where her tenure overlapped with that of fellow professor Obama.

Kagan worked a short time in private practice in Washington after clerkships with the late Supreme Court Justice Thurgood Marshall and retired Judge Abner Mikva of the U.S. Court of Appeals for the District of Columbia Circuit. Kagan holds a Harvard law degree and also graduated from Princeton and Oxford universities, receiving a bachelor’s in history and a master’s in philosophy.

The New York City native is the fourth woman to ever sit on the court. Her addition also changes its religious makeup, leaving it without a Protestant on the bench for the first time in history.