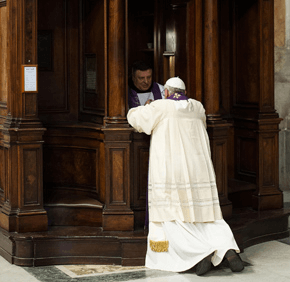 By Catholic Review staff
The sacrament of reconciliation will be available at every parish in the Archdiocese of Baltimore April 11 from 3 to 8 p.m.
The five-hour event is inspired by “The Light is on for You,” a program launched by the Archdiocese of Washington and the Diocese of Arlington in 2007, and is now in dioceses across the United States. The Archdiocese of Baltimore has participated in the program for the past several years.
“By participating in the sacrament of reconciliation, whether our first time in days, weeks, months or years, we are experiencing God’s individual and unwavering love for us and one of the true graces made available to us by our Catholic faith,” reads a statement on the Archdiocese of Baltimore website. “God loves us just the way we are, but he loves us too much to leave us that way.”
Catholics are especially encouraged to go to confession during Lent because of the season’s penitential nature and in preparation for celebrating Easter.
According to the Catechism of the Catholic Church, “Those who approach the sacrament of penance obtain pardon from God’s mercy for the offense committed against him, and are, at the same time, reconciled with the church which they have wounded by their sins and which by charity, by example and by prayer labors for their conversion.”
Catholics are encouraged to contact their parishes for more information. The archdiocesan website, Archbalt.org, includes guides for making a good confession in English and Spanish.
Pope Francis has been a vocal advocate of confession. Below are some of his memorable quotes of encouragement for Catholics to receive the sacrament:
In life we all make many mistakes. Let us learn to recognize our errors and ask forgiveness.
– March 4 on Twitter, @Pontifex
“When was the last time you confessed. Two days? Two weeks? Two years? Twenty years? Forty years?” Go!
– Feb. 19 at his general audience at the Vatican
Confession is an encounter with Jesus whose “mercy motivates us to do better.”
– April 29, 2013 during daily Mass at Domus Sanctae Marthae
“Tell them that our father is waiting for us, our father forgives us, and even more, he celebrates.”
– March 28 during a penitential liturgy before confessing his sins at St. Peter’s Basilica
“Confession helps people feel shame for the wrong they have done and embraces them with God’s love so that they know they are forgiven and can go out strengthened in the battle to avoid sin in the future.”
– April 2013 homily during daily Mass at Domus Sanctae Marthae
“Confession is not a prosecuting court but an experience of forgiveness and mercy.”
– March 28 to confessors and other participants attending a course sponsored by the Apostolic Penitentiary
“When your confession is over, you’ll leave free, great, beautiful, forgiven, clean, happy — this is what’s beautiful about confession.”
– Feb. 19 at the pope’s general audience at the Vatican
See also:
How do I go to confession after not going for many years?
Pope Francis’ top ten reasons to go to confession
PrevNext