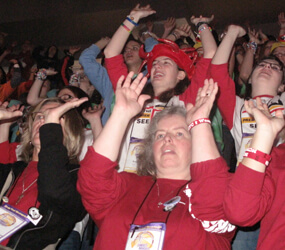 KANSAS CITY, Mo. – Father John Rapisarda was standing on the concourse of the Sprint Center arena Nov. 21 when a teenage girl walked up to him.

She whispered something and handed him a pen. The teen turned around and the associate pastor of Our Lady of Mount Carmel, Essex, scribbled his signature on her shirt next to the names of many other priests.

When someone told Father Rapisarda that it was a special moment, he looked humbled.

“It’s very cool,” said Father Rapisarda, who came with a contingent of more than 20 from Mount Carmel.

At the National Catholic Youth Conference in Kansas City Nov. 19 to 21, priests were like athletic stars or celebrities rolling into town.

“I don’t know quite that much,” said Father Charles M. Wible, pastor of St. Francis de Sales in Abingdon with a laugh.

But, in the Year for Priests, they were cherished at the conference.

Both Father Wible and Father Rapisarda traveled with the Archdiocese of Baltimore group, which included teens, youth ministers and representatives from the Division of Youth and Young Adult Ministry.

What made Father Wible want to be a part of such a gathering?

“I guess the most important reason is to support the young people and to connect with them,” Father Wible said. “There’s a community that bonds at NCYC, within the parish and within the diocese. It’s also a real shot in the arm for me. It renews my faith. It renews my hope. It gives me a beautiful vision of the larger church.”

Father Wible is a former youth minister and has attended six NCYC gatherings. He said each is unique in its own way because each person is different. The first conference he attended was held in Philadelphia, where 5,000 attended.

This year’s gathering in Kansas City drew 21,000, according to officials.

“What’s the same is the energy,” Father Wible said.

Father Rapisarda was ordained in 2008 and assigned to Mount Carmel. He saw a growth among young parishioners during the three-day event.

“To see them understand God in the church in a deeper way is just (great),” Father Rapisarda said.

Father Wible took part in a massive reconciliation at the Kansas City Convention Center and heard from young people ready to change.