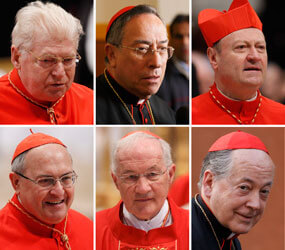 One can pretty well assume that all of the candidates considered for this office would describe themselves as “pro-Vatican.” The Italian hierarchy is not full of papal critics or ecclesiastical rebels.

What does distinguish Cardinal Scola is that he is very much in line with the thinking of Pope Benedict XVI. Like the pope, he is a respected theologian who sees a crisis of values in modern society and believes the church must mobilize its resources in resisting this slide.

Both men also view education – and more specifically, Christian formation – as a top priority if the church’s members are to successfully challenge the secular drift of contemporary culture. For several years in the 1980s and ’‘90s, he was a consultor to the Congregation for the Doctrine of the Faith.

The appointment June 28 prompted immediate speculation in the English-language press about Cardinal Scola’s “papabile” rating. In fact, many reporters presumed this made the 69-year-old cardinal the leading Italian candidate in a future conclave.

But that he slipped so easily into the front-runner status may say something else: Right now, there is little if any consensus, in Italy or elsewhere, about who the strongest papal candidate would be.

There are several reasons for that. For one thing, Pope Benedict, at 84, shows no signs of ill health, so his possible successor is not something cardinals are worrying about. In addition, the world’s cardinals have come together infrequently in recent years; as one cardinal said during the last consistory in 2010, “We really don’t know each other very well.”

Several cardinals who participated in the previous conclave in 2005 said that serious thought about candidates really takes shape in the daily group meetings of cardinals, called general congregations, that occur after a pope’s death.

So although journalists who parachute into Rome tend to speculate about “papabili,” most people in Rome and at the Vatican do not have papal tote boards going.

One reason Cardinal Scola’s name will automatically figure on lists of papal contenders is that, twice in the last century, archbishops from Milan have been elected pope: Popes Pius XI in 1922 and Paul VI in 1963. Milan remains the country’s most important diocese, with nearly 5 million Catholics. And even after two non-Italian popes in a row, many Vatican-watchers still believe the College of Cardinals will look first to the field of Italians when the time comes.

Two other Italian cardinals are often mentioned as potential candidates. One is Cardinal Gianfranco Ravasi, 68, a biblical scholar and the current head of the Pontifical Council for Culture, who, in fact, demonstrates a huge breadth of culture in his frequent encounters with the press.

Cardinal Ravasi, however, has no experience as a diocesan bishop. His name was rumored to have been considered for Milan, which would have raised his profile considerably.

The other Italian, 67-year-old Cardinal Leonardo Sandri, is also an Argentine, making him, to some observers, the ideal Euro-Latin American hybrid candidate. Born in Argentina to parents of Italian descent, he heads the Vatican’s Congregation for Eastern Churches and has served extensively in the Vatican diplomatic corps. But he, too, lacks pastoral experience as the head of a diocese.

Vatican officials tend to dominate pre-conclave speculation because they’re more visible on the ecclesiastical landscape, to the press and to the world’s cardinals. Many sources said the election of then-Cardinal Joseph Ratzinger in 2005 was due in part to the fact that most cardinals had met with him several times when he headed the doctrinal congregation, during “ad limina” or other visits to Rome.

Canadian Cardinal Marc Ouellet, 67, who was described by some as a “dark horse” candidate in 2005, is another Vatican official occasionally mentioned in talk of a future conclave. The former archbishop of Quebec, he now heads the Congregation for Bishops.

One established contender is Honduran Cardinal Oscar Rodriguez Maradiaga, 68, who has headed the Archdiocese of Tegucigalpa since 1993. Considered a leading Latin American candidate in 2005, he has been an energetic pastor at home and an influential voice on social issues in the international arena.

Vatican sources, however, have sometimes tipped another Latin American, 67-year-old Cardinal Juan Cipriani Thorne, as a future candidate for the papacy. A member of Opus Dei, he is a former basketball star and obtained an engineering degree before becoming a priest. As archbishop of Lima, one of Latin America’s biggest dioceses, he has amplified the church’s voice in political affairs.

Most cardinals on “papabile” lists are in their late 60s, reflecting their high visibility in the prime of their careers. But serious conclave-watchers should also look at a different age group, those in their late 70s. These are cardinals who have been around longer and therefore become better known to their confreres – just as Cardinal Ratzinger was when he was elected at the age of 78.

There is also a bigger pool of older cardinals to choose from. At present, almost half of the voting-age cardinals are between the ages of 75 and 80. Among them are several names from old “papabile” lists: Cardinals Francis Arinze (Nigeria), Jose Saraiva Martins (Portugal), Claudio Hummes (Brazil) and Dionigi Tettamanzi (who just retired from Milan).