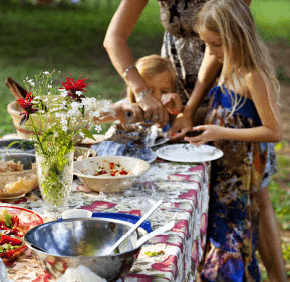 SPARKS – Sitting at a picnic table on a hot summer evening, Jane Lorenzi, 16, was recounting the new vegetables she’s tried through her family’s community-supported agriculture membership when a fellow picnicker asked if she ate the beet greens.

You should, she was told.

Lorenzi was promptly advised on how to prepare the dark leaves – either chopped raw in a salad, or sauteed with onions and spices – with a warning that they wilt quickly after harvesting.

The impromptu cooking lesson was part of the Lorenzi family’s informal culinary education, which begins each week with a box from Calvert’s Gift Farm, a community-supported agriculture venture, or CSA, its owners Jack and Beckie Gurley launched near Sparks in 1998.

As members of the CSA, the Lorenzis receive a weekly portion of the farm’s produce, which, in June, included the beets. A membership costs $500 for 24 weeks.

The Lorenzis pick up their box at the farm; some CSAs – the University of Maryland’s extension service lists 72 across the state – deliver boxes to drop sites where members pick them up.

Community Supported Agriculture offers means for people to buy food — often produce, eggs or meat — directly from a farmer. People purchase “shares” of the farm’s produce at the beginning of a growing season for a determined number of weeks. Each week, the “shareholders” pick up a box containing their portion of that week’s harvest at the farm or a designated site. CSA farms often provide opportunities for their members to work on the farm and learn about how food is grown and harvested. Shareholders often cite the feel-good and health-conscious benefits of financially supporting the work of small local farmers, connecting to their food producers, and eating in season.

Lorenzi and her mother, Dena, joined other CSA members for Calvert’s Gift Farms’ summer solstice potluck June 20. The gathering – where Jane got the beet green advice – was one way the Gurleys build the “community” aspect of their CSA, Beckie Gurley said.

The Gurleys also host work days, where their 60 members are invited to help pick vegetables in exchange for a reduction in share cost.

The farm’s name comes from Beckie Gurley’s appreciation for the sense of place her family instilled in her, she said. Her ancestors voyaged on the Arc and the Dove in 1634 to make a life in Maryland, which was founded by the Calvert family.

Being part of a CSA has encouraged the Lorenzis to eat a greater variety of vegetables, including ones they had not tried before the membership, such as garlic scrapes, said Dena Lorenzi, whose family attends St. Joseph in Cockeysville.

“The thing for me that’s neat is reconnecting to nature,” Dena Lorenzi said. “You don’t realize how disconnected you become, even in the ’burbs.”

On a quest to learn more about where her food comes from, Jane Lorenzi discovered CSAs while hunting online for local farmers’ markets, she said.

At her urging, the family joined the Gurleys’ CSA after she and her mother sampled one of their heirloom tomatoes at a farmers’ market – a tomato Jane insists is the best she has ever tasted.

A junior at Notre Dame Preparatory School in Towson, she said she sees a connection between the way the CSA cares for its soil and crops, and Catholic social teaching, which includes stewardship of creation.

Ivan Pare, a gardener in Fairfield, Pa., would agree. He is passionate about soil quality and is trying to grow nutrient-dense vegetables that surpass the quality of organic supermarket vegetables. He believes that farming without chemicals is the best way to care for creation and rural communities, he said.

Pare often attends Mass across the Mason-Dixon Line in Emmitsburg, and is part of a small group of Catholics beginning a CSA, a decision they say is rooted in prayer and God’s providence. They call it Heaven’s Harvest.

Mark and Molly Carlson, parishioners of St. Anthony Shrine in Emmitsburg, joined Heaven’s Harvest after being part of other CSAs. They joined their first one several years ago while living in Madison, Wis.

Molly Carlson tries to buy organic vegetables, but it can be hard to find organic produce in local grocery stores, she said. She appreciates that produce from Heaven’s Harvest has not been grown with chemicals, and is glad to see her daughters, ages 1 and 3, eating a variety of vegetables in their meals.

“I also like to be ‘forced’ to eat these vegetables,” she said, adding that it makes her feel guilty if anything goes to waste. “I like that it forces you to be more creative with what your kids eat.”

To see a photo slideshow, navigate the arrows below.