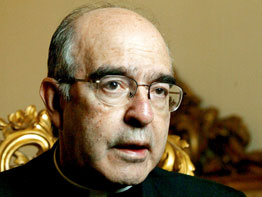 ROME – Cardinal Alfonso Lopez Trujillo, president of the Pontifical Council for the Family, died April 19 at Rome’s Pius XI clinic, where he had been hospitalized since early April with a respiratory infection. He was 72.

Pope Benedict XVI called the cardinal a “tireless pastor” who generously served the church and “the Gospel of life.”

The pope, who was in the United States at the time of the cardinal’s death, expressed his condolences in a telegram addressed to the cardinal’s brother, Anibal Lopez Trujillo. The Vatican released a copy of the telegram April 21.

The pope said the cardinal gave “clear testimony of his deep love for the church and his dedication to the noble cause of the promotion of marriage and the Christian family.”

A funeral Mass was to be held at the Vatican April 23 with the pope presiding.

The Colombian-born cardinal, who served as archbishop of Medellin from 1979 to 1991, had been president of the family council at the Vatican for nearly 18 years.

But even before taking up the Vatican post, Cardinal Lopez Trujillo’s influence was felt throughout Latin America and beyond because of his work as general secretary and later president of the Latin American bishops’ council, known as CELAM.

His death leaves the College of Cardinals with 195 members, 118 of whom are under the age of 80 and, therefore, eligible to vote in a conclave.

As president of the Pontifical Council for the Family, Cardinal Lopez Trujillo denounced proposals in several countries that would authorize same-sex marriage and adoption by same-sex couples.

He helped local churches oppose legislation to legalize abortion or make it easier to obtain and called promotion of contraceptives a form of “biological colonialism” by drug companies and wealthy nations.

He described drug addiction as a modern “form of slavery that oppresses the whole world.”

In 2004, he went on British television to warn that condoms were not an effective barrier against the AIDS virus and suggested condom packets should carry a warning to that effect.

Cardinal Lopez Trujillo was convinced that the family risks destruction and that the church must lead an “evangelical struggle” to defend it.

“People don’t realize the human tragedy they are preparing,” Cardinal Lopez Trujillo said in a 2006 interview with Catholic News Service.

“If you look at Europe or the Americas, there’s not a parliament where these issues are not being debated. I think it’s providential to have a pope who speaks with courage and clarity – and to have a curial agency to lend help when needed,” he said.

At the Synod of Bishops in October 2005, he urged a firmer line on the issue of Communion, politics and abortion. In his view, he said, politicians who promote unjust legislation must “remedy the evil committed” before they receive Communion.

When Spain approved gay marriage in 2005, Cardinal Lopez Trujillo said Catholic civil officials should conscientiously object to taking part in such ceremonies, even if they lose their jobs as a result.

On several occasions, he praised the administration of U.S. President George W. Bush for its opposition to abortion and its positions on a range of pro-life and family issues.

In the CNS interview, the cardinal freely acknowledged that his council engages in political questions. But he said that while Pope Benedict has cautioned church leaders against involvement in partisan politics, the council is simply “enlightening politicians and saying what the values are … as a service to society.”

“It’s a different kind of politics,” he said. “Those who are afraid of this are mistaken.”

Born Nov. 8, 1935, in Villahermosa, Colombia, he moved with his family to Bogota as a young boy.

After studies at the local archdiocesan major seminary, he went to Rome for studies at the Pontifical University of St. Thomas Aquinas, also known as the Angelicum, where he earned his doctorate in philosophy. He also took courses in theology, sociology and Marxism.

Ordained a priest Nov. 13, 1960, then-Father Lopez Trujillo continued his studies in Rome for two more years before returning to Bogota.

He taught philosophy for four years at the local major seminary and developed a course – taught throughout Colombia – on Pope Paul VI’s 1967 encyclical, “Populorum Progressio” (“The Progress of Peoples”). He participated as an expert in the second general conference of Latin American bishops, held in Medellin in 1968.

On Feb. 25, 1971, Pope Paul named him an auxiliary bishop of Bogota, and he was ordained a bishop March 25, 1971. The next year he was elected CELAM general secretary, continuing to serve in that post through his May 22, 1978, appointment as coadjutor archbishop of Medellin, his June 2, 1979, succession as archbishop and the 1979 third general conference of CELAM, held in Puebla, Mexico, with the participation of Pope John Paul II.

Then-Archbishop Lopez Trujillo was elected president of CELAM at the Puebla meeting, serving until 1983, when he was named a cardinal by Pope John Paul. He was president of the Colombian bishops’ conference, 1987-1990.