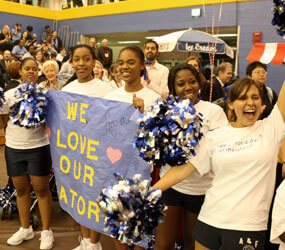 “What’s in a name? In this instance the answer is ‘everything,’” Seurkamp said in a statement. “’Notre Dame of Maryland’ honors our proud tradition, while ‘University’ enthusiastically embraces our path forward in leadership in liberal arts, health sciences and education – nationally and internationally. Notre Dame of Maryland University encompasses the strength of our past and the promise of our future.”

The name was announced amidst great fanfare, drawing enthusiastic applause from those in attendance. Confetti was strewn about as people took in the name.


Freshman Kelsey Guthrie took part in the announcement with Mildred Otenasek, a member of Notre Dame’s class of 1936 and a former professor there.

“I like it,” Guthrie said of the name. “It’s just a title for everything that’s already here.”
The school’s board of trustees unanimously endorsed the name selection at a meeting Oct. 30.

Otenasek, 96, told those gathered, “this is such a wonderful occasion.”

Board chair PJ Mitchell, class of 1969, said the designation reflected years of progress.
“We became a university some time ago, we just didn’t call ourselves a university,” Mitchell said. “I think this is a long time coming.”

The school said respondents “overwhelmingly” wanted to keep “Notre Dame of Maryland” as part of the designation.

The new name comes after months of research and study, the school said.

The school believes the designation recognizes a major shift in the school, but administrators believe the school will maintain its small, student-focused classroom setting.

“It really is a significant step for the college,” Seurkamp told The Catholic Review. “We’ve spent a lot of time carefully engaging all of our constituent groups. I think it’s important to keep in mind that we are taking this step very carefully while holding on to those parts that have always been a part of Notre Dame.”

Mitchell, a global vice president for IBM, said the seeds of success were planted on Notre Dame’s campus.

“It’s really where I developed my leadership skills and it’s one of the places where I learned I could do anything I wanted to do,” Mitchell said.

Notre Dame was already being lumped into the university category when it was recognized by U.S. News & World Report and The Carnegie Foundation.

Neighboring Loyola College in Maryland recently made a similar move, officially becoming Loyola University Maryland in the fall of 2009.

“In a very big way, it really is a reflection of the kind of institution we’ve become,” Seurkamp said. “We’re naming what we are today.”

The school, founded by the School Sisters of Notre Dame, said its original charter authorized the school to establish master’s and doctoral level degrees.

Notre Dame was the first Catholic college for women in the U.S. to award the four-year baccalaureate degree. The women’s college offers 29 majors.

Notre Dame offers undergraduate and graduate programs through four schools – Arts and Sciences, Education, Pharmacy and Nursing. The pharmacy school opened in the fall of 2009.

Weekend and accelerated colleges are offered for women and men and there is an extensive graduate studies program.

Seurkamp said members of the 1960 class are working to reconstruct an arch that used to welcome visitors to the campus and create a pedestrian walkway.

With a designation change comes a massive overhauling in identity awareness.

Seurkamp said a new logo, branding identity and athletic uniforms will be unveiled when students return in the fall.

“It’ll take some time for it to roll off our tongues,” Seurkamp said. “We’ve got until next September.”