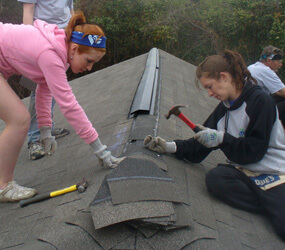 WASHINGTON – Instead of taking a typical vacation on a tropical beach, more college students are choosing alternative spring-break service trips to help the poor in the United States and around the world.

“Students are inspired by the service they do, and when they come back to Buffalo, they realize they didn’t have to go to Mexico to see poor people,” said Sarah Signorino, alternative spring break coordinator at Canisius.

“We can see them four blocks away from school, and we can make a difference right here at home,” she told Catholic News Service in a telephone interview.

Canisius students recognize the trips are a way to fulfill the school’s Jesuit mission that they be men and women for others and be servant leaders.

“It provides an opportunity that I do not have during my normal routine– to meet entirely new people and be in solidarity with them for a time, listening to their stories and sharing in their life,” said Josal Diebold, a senior at Canisius. Diebold recently returned from an immersion trip to Washington.

In Washington, Canisius students and those from other Jesuit schools attended a conference about immigration and lobbied their representatives in Congress.

“In hearing undocumented immigrants and torture survivors tell their stories, it dawned on me in a new way how their voice is silenced,” said Diebold, a religious studies and psychology major.

This past March, 80 students from Sacred Heart University in Fairfield, Conn., engaged in Habitat for Humanity trips to Mississippi, Tennessee, Georgia and North Carolina during their spring break. Ten additional students traveled to the village of Tierra Blanca, El Salvador.

During the domestic Habitat for Humanity trips, students learned more than just the practical skills needed to build a house.

“They get the sense that they’re helping someone in a really profound way,” said Sarah Heiman, adviser for the Habitat for Humanity trip to Georgia.

She said an alternative spring break seemed “natural” to the students on the Georgia trip.

“This should be what people should always think of doing when they go on spring break,” said junior Scott Barry. “It has everything anyone could want! Nice weather, a lot of new people to meet, and you make great friendships.”

“I would rather be putting shingles on a roof then sitting on a beach all day,” said Kaitlin Mulqueen, president of Sacred Heart’s Habitat for Humanity club.

“I’m inspired to participate in these trips because at the end of each day I feel accomplished. I’m able to sit back and say this is what God put me on the earth to do,” she said.

By the end of their week in Georgia, Barry, Mulqueen and students from 13 other schools had built nine houses in five days.

“We put a roof over a family. We gave them a house to make a home. How many college students can say that they did that in a week?” added Mulqueen.

Ryan Cooley, a student at The Catholic University of America in Washington, went with 11 of his fellow students on a one-week mission trip to Comayagua, Honduras, led by Franciscan Father Andrew Santamauro, director of the campus ministry department.

“I became interested in this service trip because I knew that it would push me beyond my comfort zone,” Cooley told CNS.

“We spent most of the week painting houses and furniture in a village for rehabilitated single mothers, who often came out of abusive relationships, and we spent our afternoons playing sports and games with the village children,” said Cooley.

He said one day the students “ate the same daily rations that a Honduran family is provided” and were astonished “they manage to survive on so little food.”

“My time in Honduras helped me to develop a deep appreciation for the work that missionaries accomplish in Third World countries and also reminded me that as a Catholic I am called to follow the example of Jesus Christ in loving service to the poor and all those who suffer,” said Cooley.