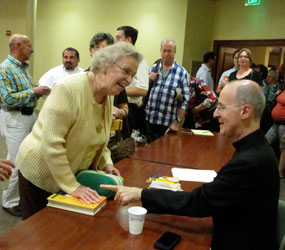 Cathedral of Mary Our Queen

The line inside St. Ignatius Church July 29 started in the parish hall and stretched all the way upstairs into the church narthex. Hundreds of people came to see Father James Martin, the Jesuit priest who has become one of America’s most well-known clergyman and have him sign a copy of his bestselling book “The Jesuit Guide to (Almost) Everything.”

Father Martin, known to some for his appearances on Comedy Central’s “Colbert Report,” spoke at the parish at the 17th annual St. Ignatius Day Lecture. During an hour-and-a-half presentation, hundreds of people laughed as Father Martin effortlessly told stories involving spirituality, religion and the Catholic Church. He offered advice and told jokes that made young and old laugh.

His presentation related well to his upcoming book, “Between Heaven and Mirth: Why Joy, Humor, and Laughter Are at the Heart of the Spiritual Life.”

Father Martin’s national appearances have brought a greater awareness of the Catholic Church, and he says he does it all for the glory of God.

“I see it as a form of evangelization, basically,” Father Martin told The Catholic Review “You try to stay out of the way. It’s very easy to get a swelled head, but after these talks are over, I go home to my Jesuit community, and I’m just another Jesuit. That sort of keeps me grounded.”

Father Martin, a noted author who also wrote “My Life with the Saints,” is currently the culture editor of the Jesuit-published America Magazine.

“It’s nice to hear someone in the church that has a sense of humor,” said 27-year-old Katie O’Dea, a parishioner of St. Matthew, Northwood. “It was nice to have someone who appreciates the humor of life because, for me, God is love and joy and all the good stuff. We get so wrapped up in things that we sometimes forget that. So many people get turned off by church today – the idea you have to be demur and everything has to be so serious. If Father Martin’s message was broadcast more, I think more people would appreciate the church for what it is.”

The talk brought in non-Catholics. Catholic Dan Schlattman’s pregnant wife, Suzanne, is a Lutheran. Although she didn’t get all of Father Martin’s Catholic references, she was drawn in by his message.

“I still enjoyed it,” said Suzanne, 27. “It’s very accessible humor. That’s why I came. Incorporating more joy into your spiritual practices is something we can all really have more of because it’s appealing. Sometimes, you don’t know how to do it.”

Father Martin said he “delights” in delivering a message that connects with young people. He said writing about saints and holiness are naturally attractive to people.

“They’re attracted to the Spirit,” he said. “It’s not so much me, it’s what I’m talking about that I think attracts people. It’s the saints. There’s a real hunger for models and ways of presenting the saints that’s not just cookie-cutter copies of one another. I’m delighted when young people come. It’s fantastic. It’s where the church needs to be.”