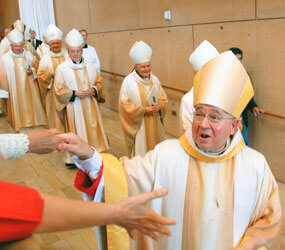 LOS ANGELES – In a prayerful, moving and colorful ceremony sprinkled with gentle humor and emotion – reflecting the man himself – Archbishop Jose H. Gomez was officially received May 26 as coadjutor archbishop of Los Angeles.

With representatives from all 288 parishes of the nation’s most populous archdiocese and members of his family present among the 3,800 people assembled in the Cathedral of Our Lady of the Angels, the former archbishop of San Antonio smiled often, choked back tears on occasion and expressed deep appreciation for his warm welcome during the Mass of reception.

“My sisters and brothers, I have so much to learn about this extraordinary family that God has gathered here in the Archdiocese of Los Angeles,” the 58-year-old native of Mexico told the assembly near the end of Mass. “I have only just begun, and I’m going to need your prayers and assistance, your counsel and guidance, and most of all your patience.

“I ask your prayers for me. I pledge you my life and my love. I promise to always be your servant, and a servant of the word of God, ‘la palabra de Dios,’ the Gospel that we all believe in,” he said.

Archbishop Gomez will automatically succeed Cardinal Roger M. Mahony, archbishop of Los Angeles since 1985, when he retires. Under canon law, the cardinal must turn in his resignation to the pope when he turns 75 next Feb. 27.

Cardinal Mahony was the principal celebrant at the Mass, joined by more than 400 priests of the archdiocese and about 60 bishops. Among the prelates were: Cardinals William J. Levada, prefect of the Congregation of the Doctrine of the Faith and a Los Angeles native; Justin Rigali of Philadelphia, also a Los Angeles native; Daniel N. DiNardo of Galveston-Houston; Theodore E. McCarrick, retired archbishop of Washington; Adam J. Maida, retired archbishop of Detroit; and Juan Cipriani Thorne of Lima, Peru.

Also represented at the two-hour Mass were students and officials from Catholic schools, institutions and archdiocesan ministries, many dressed in the traditional attire of their respective cultures.

The diversity of the archdiocese was reflected in the musical selections, choir and musicians directed by John Flaherty. The altar was draped in multicultural tapestries, the Scripture readings were delivered in Vietnamese, Spanish and English, and petitions were offered in a half dozen different languages.

“In the community of cultures here in Los Angeles,” Archbishop Gomez said, “we can see what it means to say that our church is Catholic. In this beautiful diversity, we can see something of what God desires for the whole world. We see how God gathers all men and women into one family, from every country, race and language, stretching to the ends of the earth and into heaven above.”

During the Mass, the rite involving the reception of the new archbishop was relatively brief.

Pope Benedict XVI’s letter to Archbishop Gomez about his appointment was read and accepted by Cardinal Mahony, who then asked the congregation if they were willing support the archbishop. “We Are,” the assembly replied.

“Be assured of our prayers and support as you continue the work of the Gospel,” the cardinal told him. The assembly responded with loud applause, as Archbishop Gomez was embraced by the cardinal, and each of Los Angeles’ seven auxiliary bishops present.

Later, during his homily, Cardinal Mahony drew on Archbishop Gomez’s episcopal motto and fervor for evangelization as he urged people to “proclaim Christ in fresh, inviting, and bold ways.”

In his remarks, Archbishop Gomez said he was eager to learn and listen to others in his new role. He also spoke directly to the priests in attendance.

“You are on the front lines of this great drama of salvation,” he said. “In your ministries, you are the presence of Christ. Bring God to people, and people to God. You show them the compassion of the Father who seeks to carry them home, no matter how far away they might have strayed.

“My priesthood is the joy of my life, and I am humbled, to be able to minister alongside you. I’m eager to get to know each of you, and the people you serve,” he said.

The combination of a whirlwind of events in San Antonio at the close of his five years there and his arrival in his new home left Archbishop Gomez feeling a bit overwhelmed.

At one point he smiled and said, “I cannot believe I am here, my friends – this is awesome.”

The assembly applauded, and then chuckled when he added, glancing at his many family members seated in the front rows, “What is also beautiful is that my family, they are all behaving.”

A minute later, he paused again, this time to collect his emotions as he spoke of his parents, now deceased.

With his sisters and other family members dabbing at moist eyes with tissues, he called upon Our Lady of Guadalupe, “our dear mother, to always pray for us. To her, and to her loving heart, I entrust all of us and my ministry to you. Thank you all for your kind welcome.”