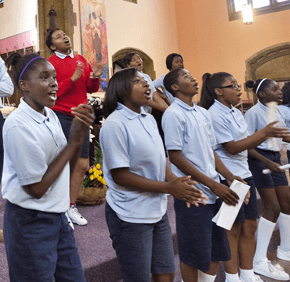 By Elizabeth Lowe
elowe@CatholicReview.org
Twitter: @ReviewLowe
Tydia Thornton learned about faith, respect and academic success at St. Ambrose Catholic School, where she has been a student for the past decade.
“I’ve grown a lot and I couldn’t have imagined being anywhere else but here,” said Tydia, 14, an eighth-grader at St. Ambrose who will attend Mercy High School in Baltimore this fall.
Tydia is one of 16 who will graduate from the Park Heights school May 31, its 85th and final commencement. In March the Archdiocese of Baltimore announced that St. Ambrose, which opened in 1926, would close at the end of the school year and merge with Holy Angels Catholic School.
A farewell Mass is scheduled for 6:30 p.m. June 7, the next-to-last day of school.
“Even though the school is small and we don’t have a lot of money, it was still a good school,” Tydia said. “I think the size makes it different. Word travels fast around here. We’re all close.”
The closure is the result of declining enrollment and mounting debt.
When Pamela Sanders became the school’s principal 12 years ago, she said, the school had 325 students. St. Ambrose currently has 118 students, according to Capuchin Franciscan Father Paul Zaborowski, pastor of St. Ambrose. When the archdiocese announced the closing, it said that 65 students were registered for the 2012-2013 school year.
Students will be bused to Holy Angels, located about six miles to the south, on the campus of Seton Keough High School. Kathleen Filippelli, principal of Holy Angels, said May 23 that “35 to 40” St. Ambrose students are registered at Holy Angels for the 2012-2013 school year. Holy Angels has 150 students.
St. Ambrose was named a receiving school in 2010, when the archdiocese closed 12 elementary schools. In 2010, the school was chosen to pilot a New American Academy Model, which included team teaching and teachers rising in grades with their students.
Sanders said that parents, students and teachers “have adjusted” to the school’s closing and there is an “attitude of acceptance.”
“After a while you have to accept what is,” Sanders said. “The saddest part of all of this is that you will have so many people displaced.”
Of the school’s 12 full-time and two part-time teachers, none have found new jobs, Sanders said.
“We know how painful the closing of a school is,” said Filippelli, who previously was principal at Father Charles Hall, one of the schools that closed in 2010. “Everyone who works here worked at a closed school.”
Sanders, who said her tenure as principal has been “the highlight of my career,” will retire June 30.
Despite the closing, Sanders said staff members “tried hard to keep school traditions alive.”
Traditions include a schoolwide field trip, a carnival and the May pole celebration, Sanders said. The school did not plant its garden, which would be ready for harvest over the summer.
The building will remain vacant for the foreseeable future, said Sanders, who wants St. Ambrose students to “carry forth that spirit of Christ that fills us all.”
“I want people to look at these kids and say, ‘You came from something that put those values in you,’” Sanders said. “Kids can go anywhere and get book learning, but we do it so differently in our Catholic schools.”
Kayon Hudley, a St. Ambrose eighth-grader who will attend Cristo Rey Jesuit High School in Baltimore, said he feels lucky to be in the school’s final graduating class.
“It’s like a really big thing to be the last class to ever graduate from St. Ambrose,” said Kayon, 14, a parishioner of St. Ambrose, Park Heights. “St. Ambrose taught me to be open to diverse things, culture and all that stuff.”
Copyright (c) May 30, 2012 CatholicReview.org
PrevNext