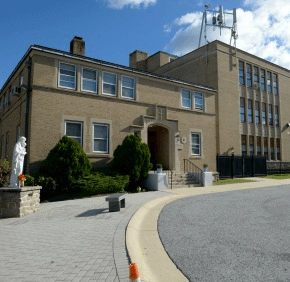 The communities directly affected by the archdiocesan plan to close three schools and merge two others are dealing with a flood of emotions ranging from anger and sadness to a sense of excitement about future possibilities.

The Archdiocese of Baltimore announced Oct. 26 that at the end of the current school year, The Seton Keough High School in Baltimore, John Paul Regional Catholic School in Woodlawn and St. Thomas Aquinas School in Hampden would close.

St. Clement Mary Hofbauer School in Rosedale will merge with St. Michael the Archangel School in Overlea on the latter’s campus. In addition, the archdiocese is planning to invest $86 million to provide much-needed improvements at other schools in the area.

“The news is very disappointing to students and faculty,” she said, “but our young women are very resilient.”

The day after the announcement, students of the all-girls school spent the day talking with their teachers and “processing the information,” Bridickas said.

“Our goal now is to get them into a new high school for next school year,” she said, noting that Dr. Barbara McGraw Edmondson, superintendent, has arranged a meeting with the heads of all Catholic archdiocesan and independent schools next week.

Bridickas said, “We hope to get a plan for a smooth transition for the girls, with whatever programs they’re interested.”

She noted that Seton Keough has several “signature programs,” and students may seek something similar at other high schools. These include Focus on the Arts, Project Lead the Way and more.

Seton Keough was created in 1988, when Seton High merged with Archbishop Keough High, which had opened in 1965 on Caton Avenue. The school can accommodate more than 1,000 students.

It has seen a 66 percent decline in enrollment over the last decade and currently enrolls 186. According to the archdiocese, the facility needs $3.4 million in improvements, and there is an additional $13 million needed for educational improvements.

“I feel very much like the girls, very sad,” Bridickas said. “It’s disappointing – we’ve put effort into getting the enrollment up. I’ve been here for three years. … We’ve been trying to get the word out about how great and wonderful Seton Keough is; unfortunately, our enrollment doesn’t reflect that.”

School Sister of Notre Dame Margaret “Peggy” Juskelis, president of the Seton Keough school board, said many were stunned by the closure announcement.

“The girls were disappointed but very respectful,” she said, of a schoolwide meeting held Oct. 27, the morning after the announcement. “There was a strong sense of making this the best year we can make it.”

“This school has stayed with me and formed my life,” said Sister Peggy, who served the school as a vice principal and math teacher in the 1990s. “I’m grateful for that blessing that happened, but I realize these are changing times and circumstances, and we need to address the needs of the girls who are here today.”

News of the closing spread rapidly among alumnae.

Amber Singletary, from the class of 2011, talked to the Catholic Review from Oxford, Miss., where she is pursuing a master’s degree in Integrated Marketing and Communications. Singletary went to the University of Mississippi on a basketball scholarship, earning Southeastern Conference academic honors and a Broadcast Journalism degree in 2015.

“Going from Maryland to Mississippi, if I didn’t have a diverse, open mind, I wouldn’t have made it here,” Singletary said. “That’s what Seton Keough did for me. It made me somebody; it made me a leader.”

Her college experience included encounters with the late Pat Summitt, the University of Tennessee coach who set an NCAA record for career wins.

“I got to shake Pat Summitt’s hand,” Singletary said. “That’s something I’ll take to my grave.”

Singletary said she was “heartbroken” hearing the news of the closing, but acknowledged having previous concern about its future. She noted that there were 111 graduates in her class. There are 47 in the class of 2017.

“I still mentor some of the girls on the basketball team,” said Singletary, who came to Seton Keough from St. Mark School in Catonsville. “They would tell me that they didn’t have enough students to do some of the activities we used to take for granted. I’m sad, that they’re not having the same experience we did.”

The archdiocese intends to sell the Seton Keough campus and reinvest the funds from the sale into Catholic education in that part of the Baltimore area. Holy Angels Catholic School and Operation TEACH, which are currently located on the campus, will relocate after the sale.

‘We made a difference’

Students at St. Thomas Aquinas School and John Paul Regional Catholic School were also struggling with a sense of loss.

Joanne Callahan, the acting principal at John Paul Regional, is in her 36th year at the school.

“I love this community; that’s why I’ve stayed here so long,” Callahan said. “Our parents are disappointed, but very supportive. The concern our students have had for each other is absolutely beautiful. The fourth-graders are saying, ‘I’m worried about the new kids.’ The eighth-graders say, ‘I feel for the seventh-graders.’ They’re empathetic.”

John Paul Regional was founded in 1979, a merger of the parish schools at the former St. Lawrence in Dickeyville and the former Shrine of Our Lady of Perpetual Help in Woodlawn. It moved into the latter’s parish school, on a campus where in 1979 the faith community became St. Gabriel.

Callahan credited Monsignor Thomas L. Phillips, the St. Gabriel pastor, and Theresa Brooks, a former principal who returned this year as a part-time staffer, during a difficult time.

“Monsignor Tom has been present to everybody,” Callahan said, “he keeps coming over to check on us.”

In the 1999-2000 school year, John Paul Regional had 318 students. This year’s enrollment is 150. According to the archdiocese, it had an operating loss of $552,000 over the last four years. The archdiocese estimates that the school facility needs $900,000 in improvements, and $4 million in educational improvements.

At St. Thomas Aquinas, acting principal Mary Cutter said, “Initially, there was shock and sadness. There were a few tears.”

In the last three years, Cutter said, St. Thomas Aquinas has lost 10 families annually. This year, the first and second grades were combined because of their small size. A decade ago, enrollment was 173 students. Currently it is 90. The archdiocese estimates that the school facility needs $356,000 in improvements and $1.5 million in educational improvements.

Cutter, who has taught at the school for 36 years, said there is a great sense of pride in the students who have graduated from St. Thomas Aquinas. They include physicians, surgeons, a judge, artists and “lots and lots” of police officers, fire fighters and nurses, she said.

“We made a difference in Hampden,” Cutter said, noting that one of the school’s staunchest supporters is an alumnus who became a biochemist, who works at Aberdeen Proving Grounds and has served tours in Iraq as a member of the Pennsylvania National Guard.

Cutter plans to make sure students are placed into new schools where they will be as successful and as loved as they were at St. Thomas, she said. The acting principal is writing down many suggestions people are giving for ways the community can honor the school’s history and legacy.

“I want us to go out celebrating,” she said. “My goal is to be happy and leave here with a positive attitude and smiles on our faces.”

Leaders of St. Michael the Archangel School and St. Clement Mary Hofbauer School expressed excitement about the educational opportunities that will result in their pending merger on the Overlea campus of St. Michael.

At the new location, Towery said, there will be room to expand St. Clement’s PRIDE program for children with documented learning disabilities. The program currently enrolls 20. Leaders of the combined school will also look at what other educational programs can be strengthened or enhanced, she said.

“How many times in life do you have an opportunity for a new beginning?” Towery said. “This model is brand-new. We will have time to plan and work together and really think about what we want this school to be.”

Paul Kristoff, principal of St. Michael, added that the new school will have two tracks per grade. He and Towery will serve as co-principals, one heading an upper school and the other a lower school.

The merged school will be known as St. Michael the Archangel-St. Clement Mary Hofbauer School, he said, but that might change if the community believes a name change is warranted.

“We will be stronger by coming together,” Kristoff said. “We’re all very excited about it. People are excited to think about the traditions we will bring from the two schools and what new traditions we can begin.”

Towery noted that the prime reason necessitating the merger is the condition of the facility at St. Clement. The archdiocese estimates that $2.5 million would have been needed to improve the building, with another $7 million needed for educational improvements.

“St. Clement is an old campus,” Towery said, noting that there are ongoing challenges with boilers, pipes, infrastructure, windows and roofing.

Towery acknowledged her tight-knit community, with many parents having graduated from St. Clement. Several faculty and staff members are also alumni.

“There’s certainly sadness and a feeling of loss,” Towery said. “Yet, I think our parents know the challenge and the restrictions of our school building.”

Beyond the Bell: Seton Keough’s A Cappella Choir