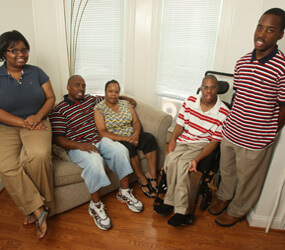 Every day, Margaret and Darryl Patrick attempt to make life work for their three children, as the family comes and goes from its row home in Baltimore City.

“If I could go back in time and change things, I wouldn’t,” Margaret said, of any challenges that may arise with her twin 16-year-old sons, Jalen and Jordan, who has special needs, and daughter Shannon, 15.

“They get along and love each other,” Darryl of his children. “One minute they’re fussing with one another and the next they’re asking, ‘How do you do this?’ Then I know they’re back to being brothers and sister.”

Christian but non-Catholic, each child nonetheless attends a school affiliated with the Archdiocese of Baltimore. Schedules for athletic schedules and extracurricular activities tend to pull everyone in different directions, but priorities are maintained.

The children rise by 5:45 a.m., when Darryl, 50, is just returning from working nights as a warehouse supervisor. Before getting his own rest, he drives Jalen and Shannon to Archbishop Curley High School and The Catholic High School of Baltimore, respectively.

Jordan, who has cerebral palsy, moves about the house in a wheelchair. A bus picks him up and takes him to St. Elizabeth School, Inc., an 11-month institution for students with below-average cognitive function or various special needs.

Margaret, 46, readies Jordan for school before she heads out the door for her job, as a Baltimore City schoolteacher.

The boys were born during the blizzard of March 1993. Jalen was barely above 2 pounds and Jordan weighed just 1 pound, 11 ounces. According to his mother, his intestines “were closed up,” and six inches of one intestine were removed. It was four months before she was able to bring him home.

Shannon was born in June 1994. Margaret was a stay-at-home mom for almost 10 years, volunteering at her children’s schools. She entered Coppin State University, which offered grants to students whose family included a member with special needs. Inspired by Jordan, she became certified as a special education teacher.

She recently earned a master’s degree, and is pursuing her Ph.D.

Jalen and Shannon attended public elementary and middle schools, but Margaret and Darryl decided they wanted a Catholic high school for each. Of no small significance, Margaret is a proud graduate of Mercy High School.

“It’s the values they instill in your kids,” Margaret said of Catholic schools. “When I say I went to Mercy, that name carries me a long way.

“I never dreamed that I would be able to afford to send my kids to a Catholic institution. We struggle paying those tuitions and I’m not going to say it’s easy, but in the long run, it’s an investment in my children’s future.”

Baltimore City pays for Jordan’s education at St. Elizabeth. Margaret said that both Curley and Catholic High “work with” the family, but that they sacrifice on vacations and in other areas.

Shannon became interested in Catholic High during a school fair. As a freshman, she achieved honor roll status, participated on the forensics team and received a certificate signed by President Barack Obama for her accomplishments.

“It’s like a home environment,” Shannon said of Catholic High. “They really work with you when you if you’re having problems. You feel close.”

Shannon hopes to attend Stanford University and become a lawyer. Jalen dreams of studying computers at Hampton (Va.) University, thanks to Curley, which has been a perfect place for him, according to his parents.

“Before they were even born, I used to say, ‘If I ever have a son, I want him to go to Curley,’ ” Margaret said of the school she once lived near.

“Jalen, like all kids, was a silly kid going into freshman year,” Margaret said. “I’ve seen the transition there. That’s one thing they told us, ‘You won’t recognize your son toward junior and senior year because they will be transformed.’ They’ve had a hand in making him the man he needs to be. That’s what I love about Curley.”

Like many, Jalen had reservations about a single-gender school, but warmed to Curley when a close friend chose it. Now, Jalen earns medals as a sprinter on the Friars’ track and field team, and readily rattles off the names of teachers he admires.

“It’s like a family environment,” Jalen said. “Many of the teachers really work with you.”

Doctors expected little of Jordan, but flourishes at St. Elizabeth, recently dedicating a book he wrote to his sister.

Jordan recalls a years ago trip to see Barney the dinosaur with his mother and sister. He’s creative, funny and loves using the computer. He surprised his family by walking a great distance before a talent show, leaving them in tears.

The Patrick household is one where support is paramount.

“I love them,” Darryl said. “All we’ve done is nudge them along and shown them what’s right and wrong, tell them how to limit their mistakes. I’m proud of them.”