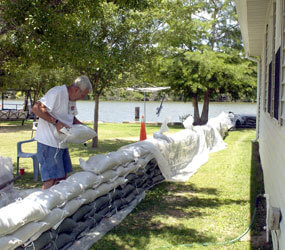 BATON ROUGE, La. – Preparing for the worst and hoping for the best is the approach being taken by those making decisions about the flooding Mississippi River and the effects of opening spillways to divert floodwater onto farmland to spare towns and cities in its path.

When the Army Corps of Engineers opened the first floodgate in the Morganza spillway north of Baton Rouge May 14, evacuation orders were given to those living in the area that would be flooded by the Mississippi’s record high waters.

Annual notices are sent to people with homes in the flood plain reminding them that their property could be flooded if the spillway is opened. So, the sentiment from most people is they know the situation and the measures that must be taken to protect the major metropolitan areas of Baton Rouge and New Orleans and many other smaller cities in between.

More flood gates were being opened to ease the water pressure on the levees lining both sides of the Mississippi River past New Orleans. Because the water was being diverted, flood crests that had been predicted to be at historic levels will be lower.

In the Baton Rouge Diocese, Catholic Charities’ office of disaster and direct financial assistance of the Diocese of Baton Rouge is included in a daily conference call with state and local officials discussing what actions need to be taken to protect people and property.

The diocesan agency’s disaster management team “was activated May 5 and has been in daily contact with the Office of Emergency Preparedness and the Emergency Operations Center,” said C.J. Roy, who is coordinating Catholic Charities’ work with government officials.

“We are identifying the areas that are affected and how we can mitigate what is going on,” Roy told The Catholic Commentator, Baton Rouge’s diocesan newspaper. The Catholic agency is on standby and ready to assist whenever the time comes, Roy added.

About 130 miles north of Baton Rouge, the Mississippi River crested more than 14 feet above flood stage May 18 at Vicksburg, Miss., which is in the Jackson Diocese.

News reports said that as of May 20, more than 4,800 people in the state of Mississippi have been displaced by flooding, with more than 2,000 of them in Vicksburg and surrounding areas. By the time the flooding ends, more than 6,000 people in Mississippi could be forced to leave their homes, according to the Mississippi Emergency Management Agency. So far one death has been attributed to the flooding.

On a bluff across from Vicksburg, on the opposite side of the Mississippi River, residents of Natchez were spared.

Maureen Irby at the Assumption of the Blessed Virgin Mary Church told Catholic News Service in a telephone interview May 18 that everyone was safe in Natchez and not experiencing any problems, but their neighboring town of Vidalia was not as lucky.

Father James Fallon at Holy Family Parish, also in Natchez, said that to his knowledge, none of his parishioners were affected, though many parts of Adams County were declared a disaster area. Father Fallon noted that the area below the bluff where Natchez sits is mostly commercial rather than residential.

He said the parish has no disaster relief efforts planned but expected parishioners would be contributing to any national collection the bishops might announce.

“Right now we’re in the process of gathering assessments. How many homes, how many families have been affected,” said Greg Patin, executive director of Catholic Charities in Jackson.

“Because it’s a slow moving disaster we have time to work out our plan and gather resources,” he told CNS in a telephone interview May 19.

Patin told CNS that Catholic Charities Jackson want to “serve the most vulnerable people. … We have plans to get boots on the ground and we will be there for the long-term.”

In the Baton Rouge Diocese, Roy noted that any disaster relief requires a mental health component, “especially for those who will be displaced for a long time” by the flooding. “This is a slow event. People could be out of their homes for a month or two,” he said.

In the aftermath of hurricanes Katrina, Ike, Gustav and Rita, Catholic Charities in Baton Rouge gained vital knowledge of the importance of quality mental health for those affected by a disaster.

The agency’s staff also will help those forced to relocate because of flooding find out about services and assistance available from the Federal Emergency Management Agency as well as state, civil parish and local entities.

People who might be affected in some way by the flooding were encouraged to submit the necessary paperwork for pre-approval for food stamps, Roy stated, because it takes time for that paperwork to be reviewed before food stamps are issued.

“We are eager to assist everyone,” said Roy, regardless of the church they attend.

He added that Catholic Charities and other agencies are gathering information about getting cleaning supplies for people whose houses will be flooded so they will have the necessary supplies available when they are able to get back into their houses.

In the Diocese of Memphis, Tenn., where the Mississippi River crested at nearly 15 feet above flood stage May 10, Catholic Charities of Western Tennessee was actively helping local parishes. Parishioners from three churches in the western part of the state had to evacuate their homes, and in Memphis Our Lady of Sorrows Church and School had to close.

Catholic Charities was distributing material relief to flood victims and supporting shelters that opened for displaced people. Agency staff planned to continue to provide for the spiritual and material needs of people as they returned home.

Contributing to this story was Sara Angle in Washington.