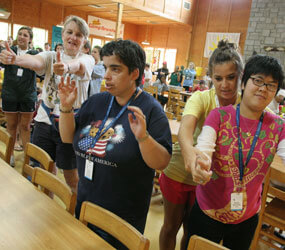 WASHINGTON – When the Americans with Disabilities Act was being debated in the U.S. Senate 20 years ago, excerpts from the pastoral statement on people with disabilities issued by the U.S. bishops 12 years earlier were read on the Senate floor in support of its passage.

“It is not enough merely to affirm the rights of people with disabilities,” the document says. “We must actively work to make them real in the fabric of modern society. Recognizing that individuals with disabilities have a claim to our respect because they are persons, because they share in the one redemption of Christ, and because they contribute to our society by their activity within it, the church must become an advocate for and with them.”

For most of her adult life, Jan Benton has been doing just that. But the executive director of the National Catholic Partnership on Disability is not sure the church’s message is getting out to those who need to hear it most.

“Our challenge and our goal is to have people know we exist so they know that the church does care,” Benton told Catholic News Service during a July 13 interview in her Washington office. “That’s the painful thing, when people say, ‘I never heard of you.’ We don’t want them to think the church is not there for them. We want them to know the church is there and has many opportunities” for them.

When the Americans with Disabilities Act was signed into law on July 26, 1990, it gave people with disabilities “a place at the table” and raised expectations for their lives, Benton said.

She spoke about an 18-year-old friend born with serious disabilities, including hands that grow from her shoulders. But when Benton saw the young woman recently, her fingernails were painted for the high school prom she had attended and she was preparing to begin college at Bucknell University in Pennsylvania.

“Her generation grew up expecting that they had rights, that they could do whatever they set their minds to,” she said.

An estimated 54 million Americans have a disability, including 5 percent of children under 18 and 38 percent of adults 65 and older, according to the U.S. Census Bureau. More than 3 million people 15 and older use a wheelchair, while another 10 million use a cane, crutches or walker.

The ADA protects the rights of people with disabilities to equal access in employment; state and local government programs and services; places of public accommodation such as businesses, transportation and nonprofit service providers; and telecommunications.

But as with the implementation of the civil rights legislation of the 1960s, reality sometimes falls short of the law and the expectations it raised, Benton said.

Instead of receiving the respect they deserve, some people with disabilities have been subject to a “misguided compassion” that encourages the elderly to consider physician-assisted suicide and the parents of a child likely to be born with disabilities to abort the child, she said.

“We’re so blessed to be in a church that can counter these arguments, a church that says every person is worthy of respect,” she added. “It’s easy to be able to argue for life.”

Benton, a secular Franciscan, witnessed the importance of helping parents cope with a poor prenatal diagnosis when a couple in her community, expecting their third child, got devastating news more than four years ago following a routine sonogram.

The child they were expecting had a heart defect and their doctor advised them to “schedule your abortion on the way out of the door,” Benton recalled. The doctor “painted the worst possible picture” of a child who would be unable to feed herself or interact in any meaningful way with her family and the world, she added.

Now Benton brags about her goddaughter Rose, describing her at a recent lunch they shared as “happily smiling, able to eat, running and playing … like any other sweet 4-year-old.”

As Rose and her family have confronted various serious health challenges, “our secular community was able to be a little support for them and they’ve known that the church recognizes the value of what they did and defends them in their decision,” Benton said.

To help combat the attitudes that leave many parents thinking they have no alternative than to abort a child who might face challenges, the National Catholic Partnership on Disability is sponsoring a Webinar Oct. 5 on the issue of poor prenatal diagnosis.

Some parents have told Benton that they support the church’s teaching that every child is important and decide not to abort a child likely to face difficulties, but when it comes time to find a school or sacramental preparation for their child, they say, “I can’t find a place for my child.”

“That’s what we (in the church) need to be all about,” supporting those families in finding what they need for themselves and their children spiritually, emotionally and in other ways, Benton said.

The October Webinar is part of a series begun three years ago that educates more than 2,000 people a year over the Internet about issues affecting those with disabilities, ranging from liturgical design to mental illness to ways to adapt catechetical programs to meet the needs of all.

“We want people with any disability to be nourished in the faith and to be able to contribute to the life of the parish community,” Benton said.