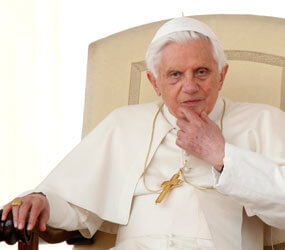 VATICAN CITY – Recalling a recent meeting with victims of sex abuse by clergy, Pope Benedict XVI reiterated his promise that the church was doing everything it could to end abuse.

During his April 17-18 trip to Malta, “I wanted to meet with some people – victims of abuse by some members of clergy,” the pope told about 15,000 people gathered in St. Peter’s Square for his general audience April 21.

The pope privately met April 18 with eight men who had been abused as minors by priests.

“I shared in their suffering and, with emotion, I prayed with them, assuring action on behalf of the church,” he said at the general audience.

According to a Vatican statement released immediately after the pope’s 20-minute meeting with victims at the apostolic nunciature in Rabat, Malta, the pope was “deeply moved by their stories and expressed his shame and sorrow over what victims and their families have suffered.”

“He prayed with them and assured them that the church is doing, and will continue to do, all in its power to investigate allegations, to bring to justice those responsible for abuse and to implement effective measures designed to safeguard young people in the future,” the statement said.

The pope reviewed the highlights of his trip to Malta during his weekly general audience.

The pope’s two-day trip helped commemorate the 1,950th anniversary of St. Paul’s shipwreck on the island, which heralded in the beginnings of Christianity in Malta.

Ever since St. Paul’s arrival, Malta has held fast to its Catholic roots, and the pope praised the Mediterranean nation for being faithful to the Gospel for the past two millennia.

It is not always easy for a country to draw inspiration from the Gospel that will help them address complicated, modern day challenges, he said.

However, the people of Malta have “a Christian vision of life” when they respond to new challenges, he said. For example, the country has staunchly maintained its respect for the unborn and the sanctity of marriage by not allowing the legalization of abortion or divorce.

He recalled his meeting with young people April 18, which was “a moment of deep and intense dialogue.”

After the youths presented their hopes, doubts and worries, the pope offered St. Paul as an example of a youth who experienced “a radical transformation after his encounter with the risen Christ.”

Young people around the world are called to discover the beauty of God’s love and the mystery of Christ’s cross and to be victorious over the trials and tribulations in their own lives, the pope said.

He said the message he took to Malta was that people should not fear life’s storms and disaster.

“Do not be afraid of the storms of life, even less its shipwrecks, because God’s loving plan is even greater than storms and shipwrecks,” he said.

He also reminded people of the problem of immigration in Malta, which must deal with large numbers of people who often are fleeing poverty, violence and persecution.

The humanitarian, political and legal problems caused by a large influx of immigrants on a tiny island “do not have easy solutions,” he said. But solutions must be “sought with perseverance and tenacity” while working together with international organizations and initiatives, he said.

At the end of the audience, a Canadian artist presented the pope with a 28-inch-high bronze monstrance. Achim Klaas, whose company is located in Ontario, handed the pope the monstrance, which is based on a traditional “ray design,” which has its roots in 14th-century art.

Also present at the audience were more than 400 priests from the diocese of Rome, who came to the square at the invitation of Cardinal Agostino Vallini, the papal vicar of Rome, to express their “most cordial and affectionate greetings” for the pope’s birthday April 16 and the fifth anniversary of his pontificate April 19.

The text of the pope’s audience remarks in English is posted online at: www.vatican.va/holy_father/benedict_xvi/audiences/2010/documents/hf_ben-xvi_aud_20100421_en.html.

The text of the pope’s audience remarks in Spanish is posted online at: www.vatican.va/holy_father/benedict_xvi/audiences/2010/documents/hf_ben-xvi_aud_20100421_sp.html.