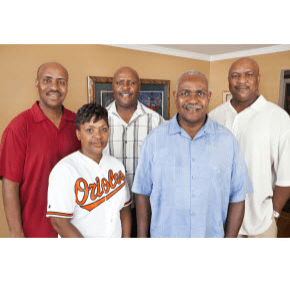 By Kyle Taylor
Special to the Review
It’s not unusual for the bond between brothers and sisters to be strong.
It is unusual for that bond to be publicly acknowledged.
The Baltimore office of Neighbor to Family Inc. will honor five members of the Williams family as its 2014 “Siblings of the Year” Sept. 24. Describing themselves as “pretty low key,” Barry F. Williams, the oldest of the five, said that the award was humbling, a blessing and due to their upbringing.
“I shared with them that we were blessed that both of our parents were in the same home and married and brought us up in a strict religious life,” Williams said. “Even though they are not physically with us, those ties they brought us up with remain, and they’re there with us whenever we come together.”
Harold and Eula Williams were married in 1953 at St. Pius V in Harlem Park, and raised their children in that parish.
“We were pretty active there growing up, particularly in music,” Williams said. “The music liturgy always appealed to us. When we were young, the church had a vibrant and thriving membership. We had numerous Masses, we had large first Communion and confirmation classes. There was a lot of activity.”
Williams said that religious upbringing still plays a huge role in his life, which was the theme of several Africentric columns he wrote for the Catholic Review.
“Growing up, it was not a question of whether or not we would go to church,” Williams said. “My mother was quite observant and made sure we all were there. To this day, it’s instilled in me to be observant.”
Williams, the director of Recreation and Parks for Baltimore County and a longtime Scouting leader, serves as a lector at his home parish, Holy Family in Randallstown. Two of his three brothers, Warren and Darrin, are still members of St. Pius V, which is currently located at St. Peter Claver.
Myron, another brother, attends Milford Mill United Methodist Church. Their sister, Delegate Adrienne Jones, speaker pro tem of the Maryland House of Delegates, is a member of Union Bethel AME Church.
Williams said they have always been supportive of one another, citing their involvement with his sister’s political campaigns.
“When you have a number of siblings, you learn the concept of sharing, you learn the concept of looking out for one another,” said Williams. “One concept we got from our parents in particular is that you learn to do good for others without seeking glory or payback in the process.”
Neighbor to Family Inc. works to place foster siblings in safe and stable foster homes together. Since 2008, it has celebrated a Baltimore family for being an extraordinary example of sibling bonds.
If anything comes from the award, Barry Williams hopes that it inspires others to give back to their community.
“A sense of public and community service is a noble thing,” he said. “We’ve been blessed in so many ways, so it makes sense for us to give back.”
Also see:
Finding common ground and hope in Scouting
PrevNext