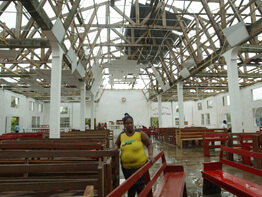 BLUEFIELDS, Nicaragua – Thousands of people living in Nicaragua’s remote northeast lost everything to the winds of Hurricane Felix, but a bishop in the affected area said the church would accompany them as they rebuild.
“The winds and flooding have destroyed a lot. People will have to start with nothing. And since flooding has destroyed the rice harvest, they won’t have anything to eat as they begin to rebuild,” said Bishop Pablo Schmitz Simon of Bluefields.
“We’ll respond to Hurricane Felix as we did in 1988 when Hurricane Joan devastated Bluefields. This one hit Puerto Cabezas, destroying 80 percent of the town, and the church will respond by helping the people rebuild their lives again,” Bishop Schmitz told Catholic News Service.
Hurricane Felix slammed into Nicaragua’s coastline Sept. 4 with 160 mile-per-hour winds. Initial reports from the region indicate that although damage in Puerto Cabezas was extensive, the death toll was relatively low.
“Along the Coco River, the flooding has wiped out several villages, but there haven’t been a lot of deaths because the government responded well and evacuated people in time,” Bishop Schmitz said.
A Catholic relief official said the devastation was extensive.
“This is a major disaster,” said Conor Walsh, country director in Nicaragua for Catholic Relief Services, the relief and development agency of the U.S. Catholic Church.
Walsh cited the case of Awas Tingni, a Mayagna indigenous village of a little more than 1,000 people.
“They got hit pretty hard by the intense winds. Their houses were pretty rickety to begin with, and now they’re gone,” he said.
Walsh said CRS has emergency supplies already in position in Sebaco, in the west of the country, but that flooding in Nicaragua’s interior would make it nearly impossible to transport the relief materials overland to affected communities. He said he was investigating purchasing relief supplies elsewhere.
He said CRS has sponsored a disaster mitigation project in the area around Waspam, the largest village on the Coco River, and the brigades that have been trained there will help make the distribution of relief supplies – once it begins – more efficient.
Although the high winds of Felix caused the major damage in Nicaragua, at least initially, by the time the storm crossed the mountains into neighboring Honduras, residents feared that drenching rains would pose the greatest danger.
“The problem here is flooding, mudslides and landslides,” said Jack Byrne, the CRS country director in Honduras.
Byrne said Hondurans feared a repeat of Hurricane Mitch, the 1998 storm that caused extensive flooding and killed thousands of people.
“The topography of Tegucigalpa isn’t made for large amounts of water. There’s nowhere for it to go. The rivers overflow quickly and easily. The sewer and drainage systems are weak. Even after Mitch many poor families rebuilt their homes in the same places despite warnings by government, because they had nowhere else to go. We’re anticipating the same thing happening again, not to the same extent, perhaps, but the same vulnerable areas are vulnerable again,” Byrne said.
Byrne said the government’s emergency agency, the Permanent Committee for Contingencies, known by its Spanish acronym COPECO, slowly has absorbed the lessons of Mitch and several smaller hurricanes that have hit Honduras in the years since.
“A much more vigorous leadership of COPECO has better prepared the people this time around. There has been lots of contingency planning, lots of early warning. The mantra has been not to let Mitch happen again, so people are very aware of the risks. But many places are hard to reach. There are lots of remote villages that we can’t get to, as the flooding will wash away access,” Byrne said.
COPECO supervised the evacuation of more than 4,000 people from high-risk Tegucigalpa neighborhoods Sept. 4.
“Fear is working in their favor. They can’t be overprepared, but they’re much more vigilant than they have been in the past. They’re as prepared as they can be,” Byrne said.
In Honduras, CRS provides support for Caritas, the local affiliate of the umbrella aid agency Caritas Internationalis, and Byrne said the two agencies had prepared relief supplies – including cooking kits, water and blankets – in several communities in the country’s interior and along the flood-prone north coast. He said CRS would coordinate its expected relief efforts in Tegucigalpa with Caritas and the U.N. World Food Program.
Following Hurricane Mitch, CRS supported the forming of local emergency committees in the flood-plagued Aguan Valley where existing government structures proved inadequate in the face of the crisis.
“This is going to be a critical test of how well they’ve prepared and what they do. They’ve been responsive, but their resources are limited, so they’ll rely on Caritas and CRS for the emergency supplies they need,” Byrne said.