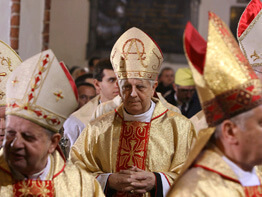 VATICAN CITY (CNS) – The resignation of a Polish archbishop over spying revelations has highlighted a tension between judgment and forgiveness in the church, one that has taken on new meaning in post-communist Europe.

In the broadest sense, it’s a tension found in the teaching of Christ, who preached forgiveness but told his followers to “judge justly” the wrongs of society.

The question emerged in a more specific way during Holy Year 2000. As the church began an “examination of conscience” to ask forgiveness for historical sins, cardinals vehemently debated whether it was proper to judge past actions like the Inquisition or the Crusades by modern standards.

In today’s Poland, the timeline has been abbreviated. The alleged spying activities involve living people and living memories, many of them documented in the immense archives of Poland’s National Remembrance Institute.

Like much of Eastern Europe, the church has quietly struggled over whether to examine such files and publish the findings, aware that the disclosures may damage the church in the eyes of the faithful.

Now that Warsaw Archbishop Stanislaw Wielgus has resigned after it was learned he was an informant to the communist-era secret police, the church may have no choice but to make full disclosure.

“We need to face the problem as soon as possible and with the greatest commitment, shedding light and liberating our own path from the land mines that have been placed there,” said Bishop Tadeusz Pieronek, former secretary of the Polish bishops’ conference.

He suggested putting more than 100 experts at work to evaluate the communist-era documentation and publish whatever is important.

The risk is that full disclosure of secret files, which were written by police agents in a continuing effort to co-opt church leaders, may end up disgracing good men or tainting them with suspicion. Sifting the truth from the propaganda in these cases is not easy, even for experts.

Moreover, “collaboration” is an ambiguous term that can mean different things to different people. Archbishop Wielgus signed an agreement to inform for the secret police so that he could study abroad, but he still claims he never harmed anyone by providing information.

Indeed, some have argued that pro forma contacts with police may have been a proper sacrifice to make in order to maintain the church’s freedom to operate in communist countries.

The question surfaced last year in Hungary, where, on the basis of newly released files, retired Cardinal Laszlo Paskai was accused of being an informant for the communist secret police from 1965 to 1974. Cardinal Paskai said simply that whatever he did was for the good of the church, and that speaking with “the powers of the state” was a necessary evil.

Which raises the question: How did Pope John Paul II handle this dilemma? The answer, according to those who knew him well, is that he had as little contact as possible with Poland’s communist regime, knowing that any such dealings could damage his ministry.

In an article written for the Italian paper La Repubblica, Joaquin Navarro-Valls, Pope John Paul’s former spokesman, said that as Krakow Archbishop Karol Wojtyla the pope made sure never to ask for favors that would allow the Polish government to blackmail him.

Yet the pope also maintained a large margin of understanding and forgiveness for priests and bishops who were forced to cooperate with communist authorities in order to do their work, aware that they all lived in “a continual tension between heroism and compromise,” Navarro-Valls wrote.

Not even Archbishop Wojtyla could avoid all contacts with the regime.

Navarro-Valls said the late pope once told him how he was sometimes summoned for questioning by police, who would ask him his views on political, social and other issues. The pope decided to answer these questions at length, explaining his personalistic conception of man, citing ancient and modern philosophers, warning of the dangers of solipsism in modern thought and expounding on the distinction between ethics and values.

At the end of these long monologues that they did not understand, the police would wave him out the door. Later, the pope told Navarro-Valls, he discovered that the police had written in his files: “He’s not dangerous,” and hoped one day he might be convinced to collaborate.

When he visited Poland last year, Pope Benedict XVI no doubt already knew that the secret police files would raise tough questions for the church. He addressed the issue in a talk with clergy in the Warsaw cathedral – the same cathedral where Archbishop Wielgus announced his resignation Jan. 7 – saying it was important for the church to confess its sins openly.

“Yet we must guard against the arrogant claim of setting ourselves up to judge earlier generations, who lived in different times and different circumstances,” the pope said.

“Humble sincerity is needed in order not to deny the sins of the past, and at the same time not to indulge in facile accusations in the absence of real evidence or without regard for the different preconceptions of the time,” he said.

The pope went on to note that as the church asks pardon for wrongs of the past, it should also remember to praise the good that was accomplished.

In that sense, it’s worth remembering that the vast majority of Polish priests and bishops did not collaborate with the communist regime, even though virtually all of them were approached. The National Remembrance Institute estimates that approximately 10 percent of clergy acted as informers under communist rule in Poland, which lasted from 1947 to 1989.

Seemingly lost in the Archbishop Wielgus affair is the fact that last August the Polish bishops issued a long and detailed document on priest-collaborators in the communist era, with guidelines to determine the moral gravity of different forms of collaboration.

It said priests who collaborated with the secret police should admit so publicly and meet with superiors to devise a way to “repair and expiate the public scandal.” In some cases, it said, resignation from church office would probably be inevitable.

The process, it added, should lead to a spirit of forgiveness, not vengeance.

The jury is still out on why these recommendations were not applied to the Archbishop Wielgus case before it became a front-page scandal.