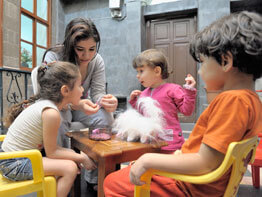 DAMASCUS, Syria – Sawsan Hussin was worried about her son Mustafa. The 10-year-old had brought the horror of Iraq with him when the family fled to Syria.

He had nightmares and would cower at the slightest noise, his hands over his ears. Mrs. Hussin knew he needed help, but as the refugee family’s savings ran out, there was no money to pay for professional help.

Then a fellow refugee, a Christian friend who had been resettled in Canada, told Mrs. Hussin by e-mail that she should take her son to see the Sisters of the Good Shepherd, who run a variety of services for Iraqis in Syria. Mrs. Hussin, a Muslim, did just that, and the sisters got the boy into therapy.

Mrs. Hussin praises the work of a particular Good Shepherd nun, who asked to remain unnamed because of the sensitive nature of her work.

“She doesn’t see us as Muslim or Christian, but just as people. She’s the only one here who opened her heart to us. We left Iraq on a dark night, and she has made us feel welcome here in a strange land,” Mrs. Hussin said.

The Good Shepherd sisters provide Iraqi refugees with a variety of services, ranging from a telephone hot line to a shelter for women and families who are victims of abuse. They also provide skills training for young refugees.

“These families see no future through their sorrow and pain. What is needed is skills training and jobs for youth, to get them out of the house, to get them to begin to think about the future,” said the Good Shepherd sister.

“The training will help them wherever they eventually resettle. Meanwhile, they can work in the refugee neighborhoods, doing hairdressing or cell phone repair. But they’ve got to be careful about where they work to avoid getting deported,” she said.

The flood of Iraqi refugees into Syria has produced big changes for the church in Syria. Caritas Syria, the local affiliate of the international umbrella group of Catholic aid agencies, dramatically has expanded its outreach. Today it manages more than $3 million a year in programs targeting vulnerable Iraqi refugees, and it cooperates in ecumenical programs with the country’s Orthodox community.

Auxiliary Bishop Joseph Absi of Damascus, a Melkite Catholic and president of Caritas Syria, said the Catholic bishops’ conference decided not to officially register Caritas with the Syrian government, an unusual development in this strictly controlled nation. He said that decision has freed the church from bureaucratic delays and allowed a more flexible and timely response to the changing needs of the refugee community.

“The Syrian government (officials) respect and trust the church, so they are allowing us to work without challenging us. They know about our work, but they don’t require us to register. The church works with the poor and vulnerable, and the government is letting us do that with complete freedom,” Bishop Absi said.