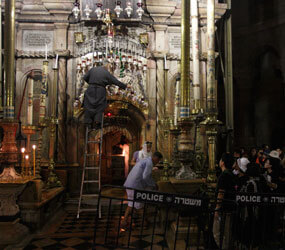 VATICAN CITY – Christians throughout the Middle East want to celebrate Easter on the same date, but the sometimes difficult system of sharing the Church of the Holy Sepulcher in Jerusalem means coming to an agreement will not be easy, said the head of the Franciscan Custody of the Holy Land.

Church leaders visiting their communities, whether Catholic or Orthodox, are always pressed by the people for a commitment to a common celebration of Easter, Christmas and other holy days, he said.

“A large part – 80 percent – of the families are mixed Orthodox and Catholic,” he said, and they want to observe the holidays together.

But, the Franciscan said, “the reality of Jerusalem and the Holy Land is always different, unique.”

The Church of the Holy Sepulcher, which tradition holds as covering the sites of Jesus’ crucifixion and his empty tomb, is shared by the Catholics under the direction of the Franciscan Custody and by the Greek and Armenian Orthodox. In addition, the Ethiopian Orthodox and Copts have chapels attached to the church.

Use of specific parts of the church and the timing of services, especially on special feasts, is governed by the “status quo” of rules established when the Ottoman Empire ruled the region for hundreds of years, he said.

Arguments over interpretations of the status quo and over access to areas of the church have been known to turn physical, including with monks and other clergy throwing punches.

The problems over the status quo agreement have meant that “the relationship among the churches has been paralyzed or blocked,” Father Pizzaballa said. “There is a relationship, but it is tied to a situation which is difficult.”

“When it’s Catholic Easter, the Catholics come. When it’s Orthodox Easter, the Orthodox come. When, like this year and last year, the Easter (celebrations) fall close together, both come, suffocating the Old City,” he said.

In the Holy Sepulcher, he said, “all of the fears, prejudices and the weight of the past come out and become concrete. Until there is a relationship that is truly serene, deep down in the fiber of the individual churches, it will be difficult for Jerusalem to live in that spirit,” the Franciscan said.

However, in some countries of the Middle East, Catholic and Orthodox already have started celebrating Easter on the same day, he said, so the synod initiative would not be new for them.

“But one of the problems now is that in some places there is a joint celebration and in others there’s not. This creates an imbalance,” he said.