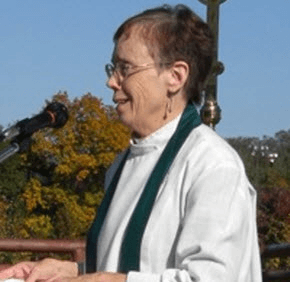 By Elizabeth Skalski and Maria Wiering

The recent shooting deaths of two women at an Ellicott City church has reinforced safety concerns for archdiocesan leaders, who say precautions and common sense can keep parishes secure.

The Rev. Mary-Marguerite Kohn, 62, co-rector of St. Peter’s Episcopal Church in Ellicott City, and parish secretary Brenda Brewington, 59, were reportedly shot May 3 by Douglas Franklin Jones, 56, a homeless man who received food from the church’s food pantry. Brewington died May 3 and Rev. Kohn died May 5.

Jones was found in the woods nearby, dead from a self-inflicted gunshot wound. According to a May 5 statement from St. Peter’s officials, Jones became angry after learning parish policy required him to limit his visits to preserve the pantry’s supplies.

Rev. Kohn was a 2009 graduate of Loyola University Maryland’s doctoral program in pastoral counseling and an affiliate professor of pastoral counseling. She was also an adjunct faculty member of the distance learning program at Fordham University’s graduate school of religion and religious education, based in New York City.

“It is heartbreaking to lose these two women, whose lives were dedicated to helping others, in an instant of brutality,” said Fordham president Jesuit Father Joseph M. McShane in a statement May 8.

“The Rev. Mary-Marguerite has made us laugh many times and she has always been generous and a helping hand,” K. Elizabeth Oakes, Tom Rodgerson and Geraldine Fialkowski said in a joint statement. “She has always been the one who has ‘taken care.’ ”

Since the shooting, parishioners of St. Paul, Ellicott City – located less than a mile from St. Peter’s – have formed a committee to address safety concerns and may create a way to communicate with visitors without opening the door and install panic buttons that alert police, said Father Matthew T. Buening, pastor.

Father Richard T. Lawrence, pastor of St. Vincent De Paul in Baltimore, called this a “sort of a freak occurrence.”

“You can’t really prepare for that type of thing,” Father Lawrence said. “It’s the kind of random thing that can happen at any time, anywhere.”

Father Lawrence said St. Vincent de Paul is locked when it is not in use, parish staff exercise caution when answering the door, and parishioners are told not to leave valuables exposed in vehicles. When alone, female staff members do not allow anyone in the building.

Tom Alban, archdiocesan director of risk management, said parish employees and volunteers should trust their intuition and not be afraid to involve authorities.

“Given the nature of the charitable works that we do,” Alban said, “oftentimes the very individuals we serve are (part of) an at-risk population, whether it be due to poverty, hunger, mental illness and drug abuse.

“It’s important that we deliver these services in a warm and welcoming way, but (by) the same token, we need our staff and volunteers to be vigilant in ensuring their own safety, as well as the safety of other participants, volunteers and employees.”

In Northeast Baltimore, the Shrine of the Little Flower added camera surveillance and an alarm system after an armed robbery in 2003.

Despite security precautions, the parish’s pastor, Father Michael J. Orchik, said it since has had several break-ins at night, but fear doesn’t override its charitable work, which includes food, transportation and medical assistance.

“We just have to be careful,” said Father Orchik, pastor of the shrine for 20 years, “because if we’re going to function as a Christian community in the city, we have to be responsive to the needs of people, and we have to do it carefully.”

Capuchin Franciscan Father Paul Zaborowski, pastor of St. Ambrose, Park Heights, said that around 2006 the church installed a glass security door outside the rectory’s main door, removed bushes near the building and began to prohibit entrance through a back door.

“I think if anything comes of it (the recent shootings),” Father Zaborowski said, “hopefully it’ll challenge parishes to really think about how they’re doing it (staying safe).”