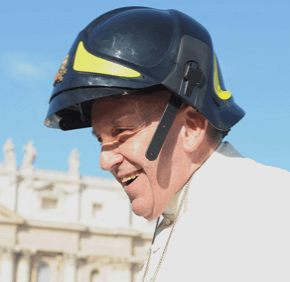 By Cindy Wooden
Catholic News Service
VATICAN CITY – The church can describe itself as “apostolic” only if it shares the Gospel with the world, remaining faithful to the teaching of the apostles and living out Gospel values, Pope Francis said.
“A church closed in on itself and its past, a church concerned only with its little rules, customs and attitudes is a church that betrays its identity,” the pope told more than 70,000 people gathered in St. Peter’s Square Oct. 16 for his weekly general audience.
Continuing a series of audience talks about how the creed describes the church, Pope Francis said the adjective “apostolic” comes from the church’s connection to the 12 men Jesus chose as his closest companions and sent to share with the entire world what he had told and shown them.
The church, he said, has “the firm conviction of being sent,” and of having an obligation to “safeguard and transmit” the teaching of the apostles.
Pope Francis said he wanted to emphasize the connection between the church’s apostolic identity and its obligation to be missionary, “because Christ calls everyone to go out, to encounter others; he sends us, asks us to move in order to bring the joy of the Gospel.”
“Once again,” he said, “let’s ask ourselves: Are we missionaries with our words, but especially with our Christian lifestyles; are we witnesses? Or are we closed, both in our hearts and inside our churches? Are we ‘sacristy Christians,’ Christians in word only who live like pagans?”
The pope said he wasn’t trying to scold anyone. “I also ask myself, ‘How am I a Christian? With my witness?”
“Let us rediscover today all the beauty of being an apostolic church,” the pope told the crowd. “And remember, eh, it is apostolic because we pray — our first task — and because we proclaim the Gospel through our lives and also with our words.”
Pope Francis said the Gospel “isn’t an idea or a philosophy,” but a living relationship with Jesus Christ. “Without Jesus there is no church.”
The guarantee that the church is teaching and sharing the authentic Jesus, he said, comes through its fidelity to the teaching and preaching of the apostles.
“Through the centuries, the church preserves this precious treasure, which is the sacred Scriptures, the sacraments and the ministry of its pastors so that we can be faithful to Christ and participate in his life,” Pope Francis said.
The church, he said, “is like a river that flows, it develops and irrigates, but the water that flows is always that which comes from the spring, from Jesus himself.”
The pope also described the church as being like a plant that grows over time and bears fruit, but lives only as long as it is rooted in Christ.
See also:
Comedy of errors: Influential cardinal’s arrival in New Zealand marked by miscues
Copyright (c) 2013 Catholic News Service/U.S. Conference of Catholic Bishops
PrevNext