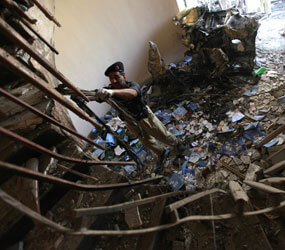 LAHORE, Pakistan – A Catholic Church center in Pakistan’s cosmopolitan eastern city of Lahore has been threatened with a suicide bomb attack, one of a series of intimidating messages given to Christians as the country’s security crisis worsens.

The threat was delivered June 10 to a Christian woman who lives next to Rabita Manzil, National Catholic Center for Social Communications, reported the Asian church news agency UCA News. The center includes the offices of the Workshop Audio Visual Education studio, Radio Veritas Asia’s Urdu service and the UCA News.

The woman said two masked men arrived on a motorbike without license plates.

“We know that you and those at the recording studio are Christians. We warn you to leave this area, embrace Islam, pay 1,500,000 rupees ($18,750) or be ready to die in a suicide bomb attack. Inform your neighbors as well,” she quoted the men as saying.

Christians have received similar threats in other parts of the country as fighting between government troops and Taliban militants continues to rage in the country’s northwest region.

A Pentecostal Bible school in the southwestern city of Quetta was closed indefinitely after suspected Taliban militants threatened a suicide bomb attack in May.

Father Nadeem John Shakir, director of Rabita Manzil, issued a statement June 10 in Lahore immediately after learning about the threat to his center.

“This is the first time the studio has received such warning,” Father Shakir said. “This has made us sad and very insecure. We are quite helpless in this regard. The threat has also demoralized our employees. If something happens to our center a number of church activities will collapse.”

In his statement Father Shakir called on people to pray for studio staff and those engaged in “such inhuman acts or supporters of such beastly activities, so that they may change their nature and become good human beings.”

The priest told UCA News that neighbors of the center had been supportive.

“However, no one can guarantee the security of our houses, convents, churches, schools, hospitals and other institutions. Even the law enforcement agencies are not safe themselves,” he said.

Intense government fighting against Taliban militants has triggered a wave of attacks in cities across Pakistan, the most recent being a June 9 suicide bombing of a hotel in Peshawar. The attack on the city’s premier Pearl Continental Hotel left 11 dead, including two U.N. aid workers, and 60 injured.

The latest bombing affects relief efforts in the country. Peshawar lies near the Swat Valley, where Pakistani government forces are battling Taliban militia in fighting that has forced more than 2.5 million people from their homes. The hotel was used by some foreign aid workers helping the displaced.