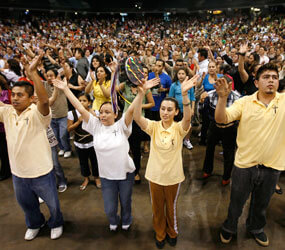 NEW YORK – Catholic young adults aren’t as attached to the church as their counterparts from the 1940s and 1950s, but they are hardly a lost generation and have not abandoned the faith, according to speakers at a two-day forum at Jesuit-run Fordham University.

More than 700 people registered for the Jan. 28-29 conference titled “Lost? Twenty-somethings in the Church,” which was co-sponsored by the Francis and Ann Curran Center for American Catholic Studies and the Fordham Center on Religion and Culture. Participants included young adults, campus ministers, youth ministers and others.

Sociologist James Davidson, professor emeritus at Purdue University, said young Catholics “distinguish between the Catholic faith, which they identify with and respect, and the Catholic Church, which they are less attached to.”

Quoting a wide body of research, including his own, Davidson said eight of 10 young Catholics believe there are many ways to interpret Catholicism and they grant more authority to their individual experience than they do to the magisterium.

“They stress the importance of thinking for themselves more than obeying church leaders,” he said. “Instead of simply embracing church traditions and teachings, they tinker with them. They distinguish between abstract beliefs and principles that they think are at the core of the Catholic faith, and more concrete norms and codes of conduct that they consider optional or peripheral.”

In essence, Davidson said, “they believe that doctrines such as the Trinity, the Incarnation, Mary as the mother of God, Christ’s real presence in the Eucharist and the need to be concerned about the poor are more important than teachings such as the need to limit the priesthood to men, the need for priestly celibacy, the church’s opposition to artificial birth control and its opposition to the death penalty.”

Catholic young adults are not immune to the complex encounter between the church and popular culture, said participants in a panel discussion on “Sex and the City of God.”

Donna Freitas, associate professor of religion at Hofstra University, said her research among college students showed that “there’s a lot of frustration, anger and alienation about the do’s and don’ts of sex, because Catholic students feel their tradition has not given them anything of use regarding sexual behavior.”

Campbell said young adults who reject the “anything-goes ethos of popular culture” are a minority in their generation, but a majority among those active in the church. She said those who successfully “fought and fumbled their way to a full embrace of Catholic teachings” were those who appreciated the countercultural nature of Catholic sexual ethics and combined a disciplined prayer life with a supportive community life.

Respondent Patrick Landry, a middle school teacher and graduate student at Northwestern University, said his young contemporaries struggle with church positions on which their personal experiences have informed them differently, including homosexuality, contraception and divorce. “We need to listen to people and keep the dialogue open,” he said. “Dismissing or ignoring these issues will only increase feelings of disconnectedness.”

In a discussion on the intersection of Catholic culture and popular culture, Bill McGarvey, former editor-in-chief of BustedHalo.com, said, “Millennials don’t really see religion as relevant to their lives.” He said there is a perceived dichotomy between the church and the contemporary culture. The latter is valued as transparent, unfiltered, democratic and collaborative.

Nonetheless, he said people are “hard-wired” to seek deeper meaning in their lives and the church should use all the contemporary tools available to spread the unchanging message of the Gospel.

Matthew Boudway, an editor at Commonweal magazine, said that in a sacramental religion such as Catholicism, faith is about practice and not just belief. Referencing Facebook, he said faith is an activity and not a status. “Catholics should be the last to forget that friendship is sustained by practice.”

Marilyn Santos, director of youth and inculturation ministries for the Archdiocese of Atlanta, said young Latino Catholics wholeheartedly embrace the mission of the church as their own, but move away from practice as they become part of mainstream American society. She said the church can retain 20-somethings “if parishes can be a community of communities, allowing people to create their own ecclesial space, while intentionally creating moments of unity.”

Tami Schmitz, assistant director of spirituality in campus ministry at the University of Notre Dame, said young adults yearn for good catechesis, a connection with God and a place in a community. Many of the students she sees have a weak understanding of the basics, but are eager, open and curious to learn about the faith.

“We owe it to them to develop ways to feed this precious hunger in them. Catechizing them in ways that are creative and exciting and answering their questions is a good start,” she said. “If we don’t do it, where else are they going to get their answers? And how long will they keep searching?”

Schmitz said those in their 20s seek community. “They want someone to know, listen to and treasure their story. They want to know that being a part of a faith community makes a difference in their lives. When you are part of a true faith community, you can’t be lost: Someone will come looking for you because they will miss you if you are not there.”

Father Robert Beloin, chaplain of St. Thomas More Catholic Chapel at Yale University, said 20-somethings are a great untapped resource which the church should not overlook.

He said campus ministry programs create a structure, the small church community, where Catholic intellectual life is promoted through “wonderful liturgy,” lectures and discussions and young adults can be with one another and “be church for one another and not just go to church.”

He said St. Thomas More is part of a pilot program to prepare undergraduate students for “vibrant life in the church” after their graduation. The program is called Engaging Students to Enliven the Ecclesial Mission, or ESTEEM, and is a collaborative effort with the National Leadership Roundtable on Church Management.