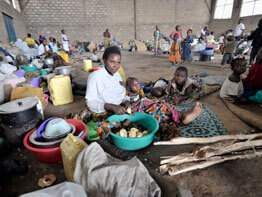 KIWANJA, Congo – As the rains fall in eastern Congo, Luisa Riziki huddles inside a tent she cobbled together out of bent branches and plastic sheeting, her four children gathered at her side on the bare ground.

Displaced by war several times in the last decade, Ms. Riziki decided this time not to run as far. With several hundred other war-weary families, she pitched her shelter alongside the razor-wire fence of a United Nations military base, hoping the foreign troops would provide some protection in this village deep inside territory controlled by rebels fighting Congo’s government.

With help from the Catholic Church, which has lobbied armed groups to respect the civilians who live here, Ms. Riziki and her children hang on. Yet she would really like just to go home, wondering aloud if any of her ripening corn crop has survived the soldiers’ widespread pillage.

“I don’t know why they keep fighting, why they keep stealing the children to fight,” she said, possessively eyeing her 8-year-old son. “I just want to go home, but I can’t return if there are bullets flying everywhere.”

The war in eastern Congo is a complex weave of conflicting ethnic and regional interests. Some 5.4 million people have died in the last decade from war-related violence, hunger and disease.

The most recent outbreak of violence came in October and November when troops under the command of rebel Tutsi Gen. Laurent Nkunda swept through the North Kivu administrative region, stopping almost at the edge of the provincial capital Goma. Ill-equipped and underpaid government soldiers and allied Mai Mai militia groups fled in the wake of Mr. Nkunda’s advance, often looting and raping as they passed through small villages, aid workers reported.

Civilians have fared little better under Mr. Nkunda’s troops. According to a Dec. 11 report by Human Rights Watch, some 150 young men were executed by Nkunda’s soldiers in this village during a 24-hour period in early November. The killings took place just half a mile from a U.N. military base here, an outpost of the largest U.N. peacekeeping force in the world, know by its French acronym as MONUC. Yet the 120 U.N. soldiers, mostly Indians who were busy evacuating foreign aid workers and a foreign journalist from the conflict zone, failed to take any action to stop the killing.

Nonetheless, thousands of frightened civilians now cluster tightly around the U.N. base, hoping for protection.

Mr. Nkunda’s army earlier had torched camps holding some 30,000 displaced people, and so when it ordered that the camp here be dismantled, Catholic officials and other nongovernmental aid workers met with rebel leaders in the nearby town of Rutshuru to argue that the civilians be spared.

“They told people they had to leave, but we tried to tell them that people are free to go wherever they want. We can’t oblige people to go where they don’t want to go, where they feel it isn’t secure. It’s not right,” Father Oswald Musoni, director of the local Caritas agency for the Diocese of Goma, told Catholic News Service. Caritas Internationalis is the international umbrella group of local Catholic aid agencies.

Father Musoni said he convinced rebel officials in mid-December to allow Caritas to begin providing emergency supplies to the camp. He said Caritas had sufficient supplies in its warehouse and was requesting food from the U.N.’s World Food Program.

Father Musoni said Caritas and the diocese’s justice and peace commission also have intervened to prevent the abuse of civilians in government-held areas. He cited the case of Kanyabayonga, a town north of here where thousands of people fled a November spree of looting and raping by government soldiers. When the church and other aid groups tried to provide emergency assistance to civilians, Father Musoni said the soldiers prohibited the entry of aid unless their own families received a share.

“We said no, that wasn’t possible. We told them that people were suffering because of their behavior,” Father Musoni said.

Meetings with army officials eventually produced a December promise to rein in the marauding soldiers, but Father Musoni said church officials continue to monitor the situation.

The recent fighting, which has produced more than a quarter-million newly displaced, has meant the rapid expansion once again of the diocese’s relief operation. Father Musoni said Caritas Goma had 15 employees in September. Today it has 120 paid workers. It provides legal and medical attention throughout the conflict zone, and operates “listening centers” to assist women who are victims of the sexual violence, which has long characterized the war.

According to Suzanna Tkalec, a protection technical adviser for the Kenya-based emergency response team of the U.S. bishops’ Catholic Relief Services, the church is a key humanitarian actor in the midst of so much suffering. Other aid groups have come and gone, but the church has stayed, she said.

“One of the strengths of the church is that they were the only ones who never left. Even in the worst moments of the armed conflict, they have always been present in the community. And that’s why they enjoy a high reputation among the population. People know they can rely on them. If there is anything that can be done, they will do it,” Ms. Tkalec told CNS.

Father Musoni said assisting the displaced has become an all-consuming task for the church, even occupying Sundays.