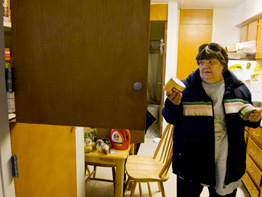 WASHINGTON – More Americans are losing jobs, and Catholic agencies are trying their best to tide them over until they find new work.

The United States shed 533,000 jobs in November, the most in any single month in 34 years. The national unemployment rate climbed to 6.7 percent in December – itself a 15-year high – up from 6.5 percent in October.

Rounding out the states with the highest unemployment rates were South Carolina, 8 percent; Nevada, 7.6 percent; Alaska, 7.4 percent; Illinois, Ohio and Oregon, each at 7.3 percent; and Mississippi, 7.2 percent.

Janice Luongo, director of Mary House in Providence, R.I., said many patrons at its soup kitchen and meal center are filled with despair and anxiety caused by unemployment and an inability to pay food, rent and utility bills.

Some, who are employed full time in low-paying jobs, are frustrated because they cannot put gasoline in their cars or afford to live in better accommodations. “You can tell that they are sliding downhill,” Ms. Luongo observed.

But now, 25 patrons will get an opportunity to gain valuable life and job training skills through a new initiative called the Thrive Mentoring Program. It will match volunteer mentors’ skills with the needs of people who need to learn how to complete job applications, open and balance a checking account, acquire social services, shop at the supermarket and become strong self-advocates.

Several computers have already been donated to the program. Students from Dominican-run Providence College will teach basic computer skills and show patrons how to use the Internet.

As bad as things are in the Detroit area, the crisis could even worsen. “I, as well as everyone else, am concerned about the tremendous loss of jobs that would come from a Chrysler-GM merger. The whole church of Detroit would be hurt,” said Father Duane Novelly, pastor of St. Matthew Parish in Detroit.

Collections are down about 10 percent from a year ago at Our Lady of Refuge Parish in suburban Orchard Lake, Mich., according to pastor Father Gerald McEnhill.

With unemployment at 10 percent-12 percent in several counties in the Diocese of Sacramento, Calif., and the cost of groceries up 7.2 percent over last year – with the price of milk and eggs alone spiking 25 percent to 40 percent higher – working families are scrambling for financial stability.

“People are losing their jobs,” Rocha said. “I have encountered people with five, seven, 10 years at a company laid off because there is a lack of business, or the company is going out of business, or their work hours have been drastically reduced.

Don Johnston, a retiree and member of Precious Blood Parish on Pawleys Island, S.C., about 20 miles south of Myrtle Beach, has had a ministry of helping unemployed parishioners find work. Now, though, rising joblessness prompted parish leaders to ask him to conduct a series of networking seminars, with the first scheduled for Dec. 11.

“Those that are well-networked have a greater opportunity to secure employment and change careers than those who aren’t,” said Mr. Johnston, whose own career had been in job staffing.

In Anchorage, Alaska, one woman received a rare treat as she was escorted around St. Francis House’s food pantry. There, in a nearly empty refrigerator, was a large roll of ground meat. She held it close to her chest, then put it in her basket and wiped away a tear. “I knew God was still with me,” she said as she collected her bags of rice and beans.

It was a typical afternoon at the Catholic Social Services emergency food pantry.

Mercy Sister Jean Pyper remembers one wintry afternoon when the pantry was down to only bags of beans and rice. It fell to her to tell a waiting room full of clients.

“Almost no one left,” she said. “You know people are really hungry if they’ll wait an hour for beans and rice.”

Church agencies can give immediate help, he added, but also try to guide those seeking relief toward longer-term goals beyond “OK, what am I going to do next month?”

Mr. Corbin recalled when the late Bishop James Malone of Youngstown tried to buy a closing steel mill when the steel crisis hit Ohio’s Mahoning Valley 30 years ago. While that effort failed, it led to a working relationship with the Catholic Campaign for Human Development on worker-owned businesses.